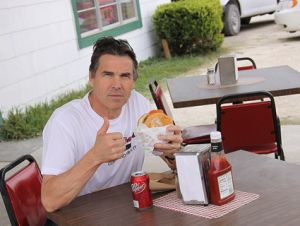 A few weeks back, Rick Perry’s presidential campaign floated a daring idea: acknowledging that debates aren’t really his thing, the Texas governor would consider skipping any future GOP candidate confabs. It seemed like an act of desperation, but given his performance on stage in Michigan on Wednesday, it might have been a good idea.

Perry’s shining moment, the one that will likely live on long past Perry’s candidacy, came when he was asked to provide specifics on how he would fix Washington’s business climate. He started strong: “When I get there there’ll be three agencies I’ll end: commerce, education…”

So far, so good. Except Perry’s answer ended there. He grasped, visibly struggling, for the third agency on his list and couldn’t come up with it. Rep. Ron Paul (R-Tex.) jumped in, helpfully, to offer that there were actually five agencies that should be abolished, and mentioned the EPA. Perry thought that sounded right, but then reconsidered, noting that he was pretty sure he thought the EPA should be rebuilt, not abolished.

The answer, it turns out, is “Energy.” Leave your jokes in the comments.