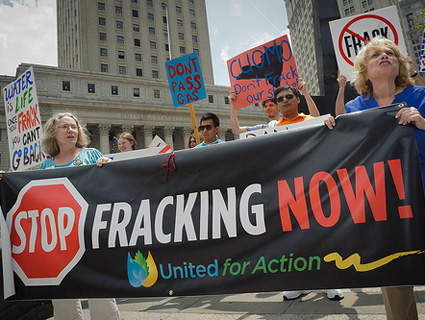 Natural gas extractors want to use counterinsurgency tactics to deal with these ladies. <a href="http://www.flickr.com/photos/akinloch/5871338969/sizes/m/in/photostream/">Adrian Kinloch</a>/Flickr

It’s one thing to say that Pennsylvania has become a battleground in the debate over natural gas extraction. But it’s quite another to actually endorse and employ counterinsurgency tactics to fight opponents of hydraulic fracturing, the controversial process used to extract the gas from the ground. But that appears to be exactly what industry insiders called for at a recent conference.

CNBC, which obtained the audio from the event, has the report. In the audio files, recorded by an environmental campaigner from Earthworks, one industry insider suggests that those who oppose gas drilling constitute an “insurgency.” Another advocates hiring former military psychological operations specialists to handle local populations.

“We have several former psy ops folks that work for us at Range because they’re very comfortable in dealing with localized issues and local governments,” Pitzarella said. “Really all they do is spend most of their time helping folks develop local ordinances and things like that. But very much having that understanding of psy ops in the Army and in the Middle East has applied very helpfully here for us in Pennsylvania.”

And here’s Matt Carmichael, the manager of external affairs for Anadarko Petroleum:

“Download the U.S. Army-slash-Marine Corps Counterinsurgency Manual, because we are dealing with an insurgency,” Carmichael said. “There’s a lot of good lessons in there and coming from a military background, I found the insight in that extremely remarkable.”

Of course, the industry folks aren’t fighting a hostile foreign enemy. They’re talking about the people—Americans in fact—who live in these communities.