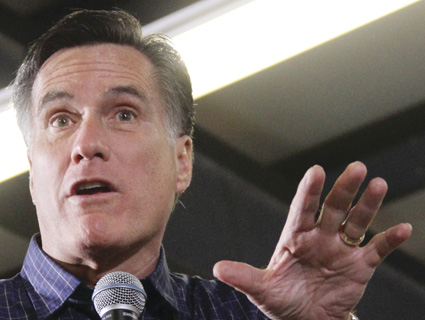 It’s not true: $600 billion of the cuts Romney is talking about will come via the “trigger,” the cuts written into the August deal to raise the nation’s borrowing limit. Those cuts go into effect in January 2013, but that’s thanks to the supercommittee’s recent failure to come up with another $1.2 trillion in savings—not Obama’s non-existent anti-military jihad.

The other $400 billion of Romney’s $1 trillion? They don’t exist, as Foreign Policy‘s Josh Rogin reported in September:

The White House’s gambit is only its latest attempts to claim savings from cutting defense when actually no cuts exist. The White House claimed it had cut $350 billion from defense over ten years as part of the debt ceiling deal, but actually there are no defense cuts in the bill.

What the bill does is set spending caps for “security” spending, which the administration defines as defense, homeland security, intelligence, nuclear weapons, diplomacy, and foreign aid. There’s no breakdown that defines which of these agencies get what, so there’s no way to be sure that all the cuts would come from “defense.” Moreover, the spending caps are split between “security” and “non-security” discretionary spending only for fiscal 2012 and fiscal 2013.

If the next five Congresses actually cut the defense budget by $350 billion and if the Congressional supercommittee fails to find another $900 billion in discretionary cuts, that would “trigger” another $600 billion cuts in defense over ten years. Added to the $350, that would total about $1 trillion in defense “savings.”

The fact is that the Obama administration has made no serious attempt to curb military spending. And if Congress finds a way to renege on the sequester-mandated defense cuts (as defense hawks have been pleading), the other $600 billion worth of cuts won’t materialize, either.