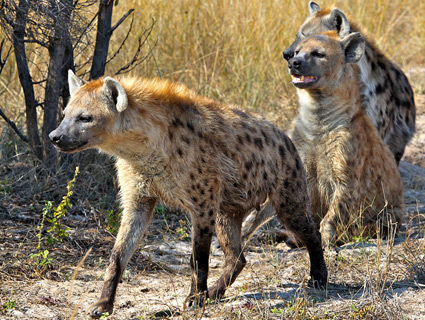 Two hyenas escaped from a South African wildlife park Wednesday by chewing through an electric fence during a power outage, but were recaptured within half an hour, the park said.

“The power went off… and the hyenas — who will chew through wire and even iron bars — managed to escape,” said Earl Smith, general manager of the Lion Park, located just outside Johannesburg. “The hyenas always try to escape if there is a long power failure. The lions don’t try to escape,” he told the [South African Press Association].

Yup. That’s right. The park’s lions—the Cadillac of the animal kingdom that’s renowned for owning things—wouldn’t even try pulling off this kind of gutsy jailbreak. A hyena, however, will evidently chomp through electrified “wire and even iron bars” if it means tasting sweet, glorious freedom.

If you ever learned anything about hyenas, chances are you learned it from Disney’s hysterically racist 1994 portrayal—amoral, wolfish, hate-filled. But despite their tarnished reputation, hyena attacks on people are extremely rare, even more so for fatal ones. And as the AFP article mentions, there was never a moment when the two escaped hyenas were a “risk to the public” (and this was when they were strutting straight into South Africa’s most populous metropolitan area). This story is just another quick reminder of how basically everything movies have taught you about wild animals is dead wrong.

(It’s also another reminder of how feckless electric fences can be, whether you’re a park owner trying to keep some hyenas detained, or you’re Herman Cain trying to stem an illegal immigrant invasion by constructing a deadly barbwired barrier along the US-Mexico border.)