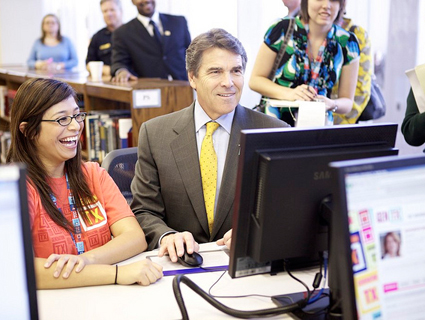 Texas governor Rick Perry, currently polling at 4 percent in Iowa, has been spared some of his usual bad news of late because of the continuing meltdown of fellow presidential candidate Herman Cain. But Mary Tuma flags a damning new report from the Texas Higher Education Coordinating Board that suggests Perry’s State Board of Education has left high schoolers in the state unprepared for the rigors of college. The report slams the SBOE’s history standards for, among other things, glossing over the true causes of the Civil War. Key quote:

Over the course of eight months, the lawyers and realtors and dentist on the board made hundreds of changes to the standards. As the politicians squabbled over the politics of who should be in or out, they tacitly adopted a bi-partisan agreement to ignore principles of sound pedagogy. In 2011 the Fordham Institute awarded the 2010 TEKS an overall grade of D, characterizing them as “a politicized distortion of history” that is “both unwieldy and troubling” while “offering misrepresentations and every turn.” As the process drew to a close, state board of education chairwoman Gail Lowe admitted that the board had failed to follow up on the college readiness effort.

The “dentist” line is a reference to Don McLeroy, whom Perry twice appointed to serve as chair of the SBOE (which is tasked with devising textbook standards). McLeroy believes “evolution is hooey,” and that the Earth is just a few thousand years old—views he sought to incorporate into the state science curriculum.

The report goes on to disect various flawed elements of the standards. It chides the SBOE for requiring that “states rights” be taught as a cause of the Civil War—even though the Texas articles of secession made no mention of states rights in their list of justifications, and the mantle wasn’t adopted until well after the war. “Why would modern members of the State Board of Education cite a reason that historical Texans did not?,” the report wonders. Good question!

The SBOE isn’t the only area where Perry has put politics ahead of expertise; as my colleague Kate Sheppard reported, climate scientists in Texas revolted in October over a report they believed had been unfairly censored by the Texas Commission on Environmental Quality—an agency helmed by a Perry-appointed climate change-denier.