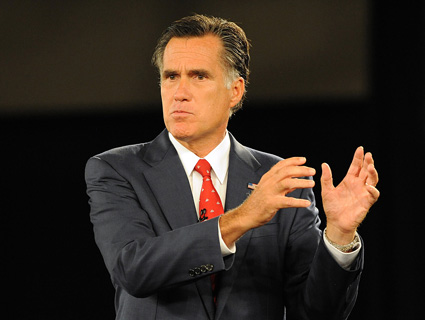 Shortly after I tweeted something rather impolite, though not inaccurate, about Mitt Romney’s appallingly dishonest new anti-Obama ad, I received a direct tweet from ex-congressman and former Louisiana Gov. Buddy Roemer. The conservative Democrat turned Republican presidential candidate (although you’d hardly know it, given that Roemer was excluded from the GOP debates) wanted to point my attention to a couple of video clips showing Romney’s er, evolving views on campaign-finance reform.

The first one is pretty boilerplate: a young Senate candidate Romney taking swipes at Teddy Kennedy while calling big-money influence-peddling “wrong.” But the second clip, wherein he tries to explain (or avoid explaining) to an old lady how it’s okay that his PAC took $1 million from a shadowy shell company that was subsequently dissolved—well, it’s just fun to watch Romney squirm. Have a look.

Here’s Romney campaigning in Massachusetts in 1994:

Oh, and if you’re needing a laugh, here’s a little holiday gift from ThinkProgress…