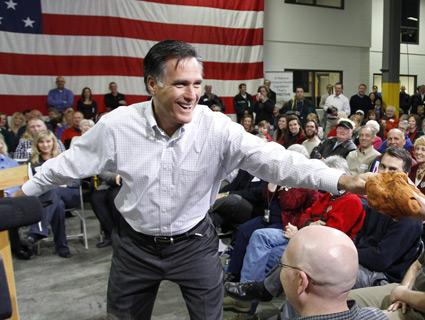 As the 2012 GOP contenders head into primary-season crunch time, 51 sitting members of Congress so far have already endorsed on-and-off front-runner Mitt Romney. And nearly 90 percent of those endorsements came from lawmakers who have received campaign cash from Romney.

Since the 2004 elections, Romney’s leadership PACs have donated a grand total of $163,620 to the campaigns of these 45 endorsers, according to the Center for Responsive Politics. Top recipients include Sen. Roy Blunt (R-MO), who received $9,670 from Romney during Blunt’s 2010 campaign, and Rep. Charlie Bass (R-NH), who’s nabbed a combined $10,000. Blunt—known as Romney’s key Capitol Hill liaison—beat out tea party darling Sen. Ron Johnson (R-WI) on Tuesday to become vice chairman of the Republican Conference, the fifth-most senior position in the GOP caucus. Bass got some extra national attention in late November when a leaked Romney campaign memo warned that the congressman’s endorsement came with baggage associated with his “lack of purity” on revenue increases. “[C]onservatives don’t trust Charlie and are guessing this means he’ll vote to raise taxes,” the memo noted.

Oddly enough, Romney reserved the most campaign dough for a tea party power broker who hasn’t announced his endorsement, yet: Sen. Jim DeMint (R-SC), who collected an even $12,000 over several years. Earlier this fall, rumors circulated that DeMint was gearing up to endorse Romney. The senator has, however, withheld his endorsement for the South Carolina primary, and his office quickly shot down the rumors as pure “fabrication.”

The other 151 sitting members of Congress who have collectively received $524,940 in campaign contributions from Romney have yet to formally endorse a candidate. Still, Romney has a significantly higher batting average than that of his chief rival. Since the 1990s, Newt Gingrich’s PACs and committee have given a total of $260,560 to 42 current members of Congress, and not one of those lawmakers has endorsed the former House Speaker in the 2012 race. But with the way the Gingrich surge has been going lately, things might be starting to change already.