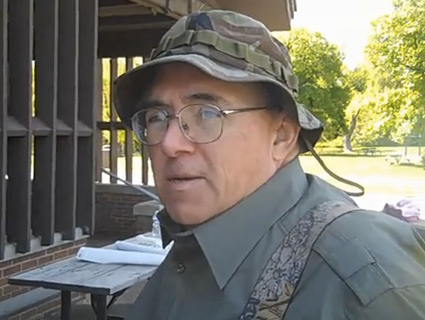 On December 8, when Eric Holder testified before the House Judiciary Committee about Operation Fast and Furious, the bungled federal attempt to combat gun smuggling to Mexico, his testimony was met with frequent snickers and occasional hostility. The source wasn’t Republican committee members, but rather a blogger seated at the press table. Wearing a homemade press pass in a National Rifle Association badge-holder, Mike Vanderboegh had arrived at the hearing toting an Army-issue laptop case that appeared capable of withstanding a roadside bomb.

A large, ruddy fellow with white hair and a mischievous smile, he had played a key role in turning Fast and Furious into a national scandal. From his home in Pinson, Alabama, Vanderboegh writes a little-known, far-right blog called Sipsey Street Irregulars. Last December, in a post titled, “Border Patrol agent killed with ATF-smuggled AR? Some ATF agents seem to think so,” he reported on rumors flying around law enforcement circles about the death of Border Patrol agent Brian Terry. Two weeks earlier, Terry and his team had been tracking a Mexican “rip crew”—who specialize in robbing drug smugglers—in Nogales, Arizona. Shots were fired and Terry was hit in the back. He died the next day.

Vanderboegh reported that agents with the Bureau of Alcohol, Tobacco, Firearms, and Explosives believed that the gun that killed Terry had been part of an anti-gun smuggling operation—later known publicly as Operation Fast and Furious. Vanderboegh suggested that ATF agents had encouraged “snitches” to purchase hundreds of guns in the US and smuggle them into Mexico to track the weapons to high-level drug kingpins. He quoted a website set up by anonymous disgruntled ATF agents: It “appears that ATF may be one of the largest suppliers of assault rifles to the Mexican cartels!” one wrote.

Using what he calls the “desert telegraph” (an anonymous email system) to communicate with whistleblowers, Vanderboegh says he helped arrange for ATF agents to talk to the staff of Sen. Jeff Sessions (R-Ala.), who was then chairman of the Senate Judiciary Committee, which oversees the Department of Justice. Later, Vanderboegh connected the whistleblowers with the staff of Sen. Charles Grassley (R-Iowa), who took over as the committee’s chair in January.

Acting on tips from the whistleblowers, congressional investigators turned up evidence that the ATF had allowed straw buyers in Arizona to purchase more than 2,000 high-powered weapons and smuggle them into Mexico in order to follow them up the chain to high-level drug traffickers. Yet hundreds of the guns disappeared in the process, some turning up later at grisly crime scenes in Mexico. So far, the missing arms have been connected to about 200 Mexican deaths.

Congressional Republicans, notably Rep. Darrell Issa (R-Calif.), the chairman of the House Committee on Oversight and Government Reform, have pursued the scandal relentlessly. At least 56 members of Congress have called for Holder to resign over of his handling of the debacle, as have presidential contenders Mitt Romney, Michele Bachmann, and Jon Huntsman. And the scandal has already claimed the jobs of the acting head of the ATF and the US attorney for Arizona.

The affair has been quite a coup for Vanderboegh, who is better known for inciting violence than for exposing wrongdoing. When Obama’s health care reform bill passed in March 2010, Vanderboegh encouraged readers to throw rocks through the windows of Democratic Party headquarters, writing:

A few people heeded his call, smashing the windows of a handful of congressional offices, including the Tucson office of Rep. Gabrielle Giffords (D-Ariz.), who was shot and seriously wounded last January.

In November, Vanderboegh made national news again, this time for his alleged role in inspiring a domestic terrorism plot. The FBI alleged that a handful of Georgia senior citizens had met at a Waffle House to plot a domestic bioterrorism attack. When they were arrested, word leaked that they’d been inspired by Vanderboegh’s unpublished novel, Absolved, in which underground militia groups plan to assassinate law enforcement and judicial officials to protest gun control and gay marriage. Vanderboegh has called the book “a combination field manual, technical manual, and call to arms for my beloved gunnies of the armed citizenry.” (Parts of the book are available online.)

Vanderboegh is unapologetic about his advocacy for armed resistance against what he views as a repressive government. He describes himself as a member of the Three Percent movement. It’s a reference to those who fought in the American Revolution, a minority that Vanderboegh claims “never amounted to more than 3% of the colonists.” On his website, Vanderboegh sums up the doctrine of the Three Percent: “We will not disarm. You cannot convince us. You cannot intimidate us. You can try to kill us, if you think you can. But remember, we’ll shoot back.”

Fiery rhetoric about resistance and revolution isn’t new for Vanderboegh, though the origins of his activism may seem a bit incongruous. “I used to be a communist,” he says. Vanderboegh, who is in his late 50s, claims he joined the anti-war movement in 1967, first with Students for a Democratic Society, then the Socialist Workers Party, and eventually the Maoist Progressive Labor Party.

Vanderboegh says his days as a left-wing radical came to an end in 1977. At the time, he was working as an aide in an Ohio hospital and an ex-Wehrmacht surgeon being treated there “wrestle[d] the devil for my soul.” “Herr Doktor,” as Vanderboegh called him, gave him a copy of Friedrich von Hayek’s The Road to Serfdom, a 1944 tome that is one of the intellectual pillars of libertarianism. Through Hayek and some tutoring from Herr Doktor on the evils of communism, Vanderboegh says, he saw the light and gave up the class struggle and even politics in general—at least for a while.

After the 1993 ATF-led siege of the Branch Davidian compound in Waco, Texas, ended in the deaths of 76 people, including 20 children, Vanderboegh joined the militia movement in Alabama. During that time, he wrote “Strategy and Tactics for a Militia Civil War,” a document that, according to the Southern Poverty Law Center, “discussed the utility of ‘snipers using violence carefully targeted'” at war criminals, secret policemen, and militia watchdogs who’d been keeping tabs on him. Later, Vanderboegh became an anti-immigration crusader. In 2005, the SPLC included Vanderboegh in a report on the then-burgeoning nativist movement, noting his involvement in Minutemen patrol groups that attempted to police the southern border.

Vanderboegh’s newfound partnership with ATF agents comes as a bit of a surprise, even to him. Thanks to the Waco disaster and other scandals, Vanderboegh says he thought of ATF agents as jack-booted thugs, who regarded guys like him as “barrel suckers.” Outrage over another ATF scandal prompted him to start his current blog, and ultimately led to his Brian Terry scoop.

In 2008, 36-year-old David Olofson was convicted of illegally transferring an automatic weapon to another party and sentenced to 30 months in prison. He became a cause célèbre for gun rights activists who believed the ATF railroaded him. Olofson had maintained that the gun was a legal semi-automatic that had simply misfired when used by a friend at a gun range, and that ATF officials had manipulated the evidence to send him to prison.

After writing about the Olofson case, Vanderboegh says he tapped in to a community of ATF agents who also saw problems with the agency and he started up an informal intelligence network of agents and other “former spooks.” Because of that network, “Brian Terry fell into our lap,” he explains.

Vanderboegh, though, is not a deep-pocketed Washington insider who could single-handedly turn the Terry case into a national controversy. He survives on a monthly disability check and his wife’s job at a forklift company, according to the Washington Post. And his blog has a very small, though devoted, readership. So Vanderboegh drew on his militia ties, getting a big assist from his old friend and militia buddy Larry Pratt, the head of Gun Owners of America (GOA), a gun rights lobbying group several times more extreme than the NRA.

Pratt, once a contributing editor to an anti-Semitic publication, wrote a book in the early 1990s that lionized death squads in Guatemala as “citizen defense patriots,” according to SPLC. The book landed him an invite to address a three-day conference of neo-Nazis and other white supremacists in 1992, which in turn helped launch the militia movement in the United States. Now a registered Washington lobbyist, Pratt helped Vanderboegh connect the ATF whistleblowers to members of Congress. He also helped sponsor Vanderboegh’s recent trip to DC, putting him up at his house and letting him work out of the GOA office in Virginia during his visit.

Vanderboegh is now working on other big scoops. In late November, Newsweek/Daily Beast published a story about a man who worked as a paid FBI informant in the 1990s, going undercover among neo-Nazi and white supremacist groups. But Vanderboegh says Newsweek didn’t run the full story, which he says included damning information about an FBI operation in the 1990s called PATCON (for Patriot Conspiracy) that allegedly involved giving weapons, explosives, and money to neo-Nazis as a way of infiltrating their networks.

Vanderboegh snagged an unedited copy of the Newsweek story and posted it on his blog under the title, “Hiding mass murder behind ‘national security.’ What Newsweak & the FBI didn’t want you to know about PATCON and the OKC Bombing.” Vanderboegh claims that the FBI had a role in repressing parts of the Newsweek story, and he’s confident PATCON is going to be the next big scandal. (Asked whether the FBI pressured the magazine to cut references to PATCON, Newsweek spokesman Andrew Kirk said, “Of course not.” He wouldn’t comment on how Vanderboegh might have gotten the story.)

It would be easy to dismiss Vanderboegh’s obsession about this latest FBI “scandal” as the healthy imagination of a conspiracy theorist with too much time on his hands. But then there’s Fast and Furious.

Vanderboegh, for his part, is relishing his 15 minutes of fame, which has catapulted him into a Fox News regular. After the Holder hearing, he wrote on his blog: “Sometimes I have to pinch myself. I just can’t believe Mrs. Vanderboegh’s wayward son finds himself in the middle of all this.”