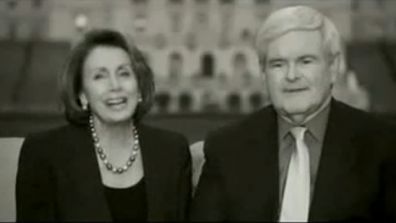 Image via the "We Can Solve It" campaign.

This is rich. Well-known climate flip-flopper Mitt Romney has launched a new website going after his Republican primary competitor Newt Gingrich for getting cozy with Al Gore and Nancy Pelosi.

The site, NewtandNancy.com, targets Gingrich for appearing in a television ad beside Pelosi for Gore’s “We Can Solve It” campaign back in 2008. Gingrich, the site claims, is in cahoots with Democrats in advancing the “liberal global warming agenda.” “With friends like Newt,” the site says, “who needs the left?”

The irony, of course, is that Mitt Romney actually did more to address global warming in his time as governor of Massachusetts than Gingrich ever did. All Newt did was spend some time on the couch with Pelosi, sell a few books on the subject, and then run off and start a pro-drilling front-group funded by big oil.

Gingrich’s group went on to wage an all-out assault on the climate bill that Pelosi championed in the House. With friends like Newt, who needs enemies?