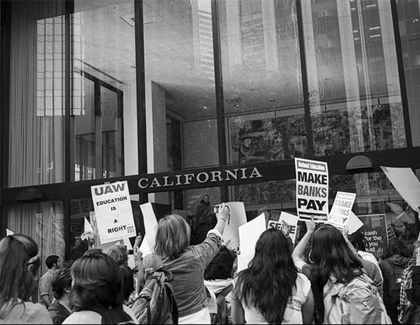 Occupiers are going to need a spring break, judging from the packed winter itinerary of national protests being planned under the Occupy Wall Street banner. The movement’s “Beyond the Park” faction may think it’s time to stop erecting tent cities in public spaces, but if these plans all pan out, the Capitol Lawn could be booked through May Day. Check out this calender of events for what some are calling Occupy’s “Valley Forge moment.“

December 5-9: Occupy Congress
A coalition of labor and progressive groups plans to camp out in DC and “Occupy Congress” in what could be the biggest coordination yet between union officials and Occupy activists. Service Employees International Union is helping secure buses and housing for thousands of protesters from around the country and rallying support through MassUnited, the SEIU-backed group best known for the “Bobblehead Brown” campaign targeting Gov. Scott Brown of Massachusetts.*

SEIU president Mary Kay Henry told the Washington Post that one of the goals is to shame Republican lawmakers into playing along with Obama’s job-creation proposals. “This is about jobs,” she said. “The Republicans’ insistence that no revenue can be put on the table is the reason we’re not creating jobs in this country.” The week’s schedule includes drop-in visits to congressional offices, a “swarm” on K Street, and a prayer vigil for the unemployed.

SEIU muscle behind a major Occupy action begs the question: In an adamantly leaderless movement, what’s to stop any faction from taking the reins and setting course toward its own maximum benefit? And SEIU’s focus on Republicans doesn’t quite echo the broader movement’s message that neither party has the back of the 99 percent. The union is a major DNC and Obama supporter, but there’s no shortage of anti-Obama signs on display at big Occupy protests. Glenn Greenwald’s take on the SEIU’s “attempted co-option” of Occupy is worth a read.

In August, O4O activists helped an 82-year-old woman in Brooklyn’s Bedford-Stuyvesant neighborhood stay in her house for at least a while longer; the city marshal who’d come to evict her backed down when 200 people formed a human wall around her door.

Now Occupy Wall Street and O4O (the two have essentially merged) are planning a multicity day of action on December 6, with bank protests, more resistance to tenant evictions, and rallies.

Michael Premo helps run Housing Is a Human Right, a documentary project about the housing crisis, and is helping organize the December 6 effort. “My goal for the day is that people who are facing eviction can see this event and know that leaving their homes is not the only option,” he says. “That they know that they can stay in their homes and defend their homes.”

December 12: West Coast Port Blockade
Having corralled 400,000 40,000 protesters to the Port of Oakland last month, successfully shutting down the country’s fourth-largest industrial port for several hours, Occupy Oakland (led by the Coup’s Boots Riley) put out a call urging other seaside Occupy satellites to do the same. At least 10 have signed on, including Seattle, Portland, the newly homeless Los Angeles movement, and the lesser-known Occupy Oxnard. The effort’s website lays out the goals:

On December 12, the occupy movements in different cities will stage mass mobilizations to march on the ports, create community pickets, and effectively shutdown the hubs of commerce, in the same fashion that Occupy Oakland shut down the Port of Oakland on November 2nd, the day of our general strike.

The announcement, with its declarations of solidarity with port workers, got a big “Thanks, but no thanks” from International Longshoreman and Workers Union top brass, who told the Portland Tribune that members are expected to clock in as usual on December 12. On November 22, ILWU President Robert McEllarth issued a statement saying none of the locals had agreed to the shutdown. “Only ILWU members or their elected representatives can authorize job actions on behalf of the union, and any decisions made by groups outside of the union’s democratic process do not hold water, regardless of the intent.”

Riley, meanwhile, has been going at it via his Twitter feed, pointing to rank-and-file ILWU workers who fully support the port action and claiming that union bosses privately back the blockade but are compelled to publicly reject it. “It’s just a game. The Longshoremen are down with this,” he wrote in a comment on the Tribune article.

January 17: Occupy Congress (same name, different protest)
Sound familiar? At least two groups are calling their plans to mobilize mass DC protests “Occupy Congress,” and there doesn’t seem to be any official connection between the two. Organizers of the action, presumably timed to coincide with the start of the 2012 legislative session, call for occupiers to “Bring 1,000,000 tents” on its Facebook page—which has about 5,000 followers so far. 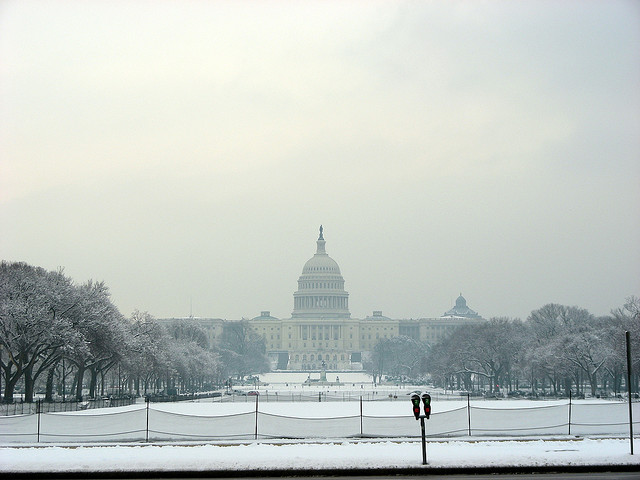 Nothing says “indefinite outdoor encampment” like DC in winter. robinpresta/Flickr

March 30: National Occupation of Washington, DC
Another contender for “biggest occupation ever,” this effort calls for a mass encampment in Freedom Plaza to protest “the failure of the Democrats and Republicans in Congress to represent the views of the majority of people, the Supreme Court for allowing the Constitution to be perverted and for ignoring the rule of law and the Chamber of Commerce and lobbyists on K St for dominating the political process in favor of the 1% at the expense of the 99%.”

Its website, october2011.org, which has been a hub of Occupy-related organizing, lists several organizers, writers, and professionals as the people running the site on a daily basis. The site also links to resources for travel, housing, and financial aid for Occupy protesters already in DC.

Correction: An earlier version of this article mistakenly described Scott Brown as the governor of Wisconsin, and has been fixed.