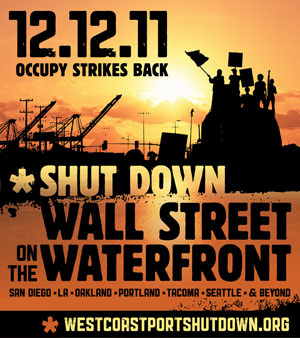 westcoastportshutdown.org Around nine o’clock on the night of November 2, after more than 10,000 people marched to the Port of Oakland in support of Occupy Oakland’s call for a general strike, an independent arbitrator declared the port unsafe for its workers, effectively securing its closure for the rest of the night. This Monday, Occupy Oakland will try to best its 12-hour port shutdown with a more ambitious West Coast “port blockade” joined by more than a dozen occupations from Anchorage to San Diego.

Occupy Oakland’s renewed call to shut down the “Wall Street on the waterfront” was sparked in large part by the October firing of 26 port truckers in Los Angeles and Long Beach who wore Teamster T-shirts to work in defiance of their anti-union employer, the Australian-owned Toll Group. Monday’s protests are also being billed as a protest against port terminals run by the Goldman Sachs-owned Stevedoring Services of America (SSA) and a show of solidarity with the International Longshore and Warehouse Union’s rank-and-file—particularly in Longview, Washington, where the union is engaged in a contract fight with Export Grain Terminal, a subsidiary of the agribusiness giant Bunge.

Barucha Peller, a member of Occupy Oakland’s West Coast port shutdown coordinating committee, said Monday’s plans are an “unprecedented” stand for a movement that’s only three months old. Activists have learned from the previous shutdown, she believes, and will work to avoid repeating mistakes such as blocking truck drivers mistakenly thought to be incoming nonunion workers. “November 2 we were organizing on the fly,” she explained. “Now we’re communicating a lot better with the port truckers and flyering a lot more down at the port.” Both truckers and the ILWU members, she added, have had “really positive responses” to the plans.

Stan Woods, a member of the ILWU Local 6 in San Francisco on Occupy Oakland’s port shutdown committee, believes that Monday’s plans are in line with the union’s decades-long history of picketing in support of social-justice causes (which former communications director Steve Stallone details here). “I have no doubt the national leadership believes what it says,” Woods said, “but the ILWU, despite its problems, is one of the most democratic unions, with lots of autonomy.” Solidarity strikes have been illegal since 1947, but ILWU workers have a history of protesting without official union sanction.

The ILWU leadership is against another port shutdown. Last Wednesday evening, ILWU communications director Craig Merrilees attended a meeting of about 40 members of Occupy the Hood’s Oakland chapter to hand out a letter from union president Robert McEllrath, which disputed occupiers’ claims. “Support is one thing,” the letter read (PDF). “Organization from outside groups attempting to co-opt our struggle in order to advance a broader agenda is quite another and one that is destructive to our democratic process and jeopardizes our over two year struggle in Longview.” McEllrath wrote that criticism of the ILWU’s position “is shortsighted and only serves the 1%.” A separate letter from the Port of Oakland (PDF) made a similar argument that port shutdowns would hurt average citizens by “diverting cargo, tax revenue, and jobs to other communities.”

Of course, disrupting commerce is the whole point of Monday’s protests. According to the Journal of Commerce, the West Coast ports are responsible for more than 50 percent of the country’s containerized trade, and a 10-day lockout of longshoremen in 2002 cost an estimated $1 billion a day. Occupy Oakland’s November blockade reportedly caused $4 million in revenue loss. In the video announcing Monday’s protest, local hip-hop artist and Occupy Oakland organizer Boots Riley declared the movement’s intention to “shut down all West Coast ports” to “not only make a statement but cause a lot of profit loss.” (Watch his statement below.)

In reality, though, the Occupy movement has no intention of actually trying to shut down all of the more than three dozen ports along the West Coast of the United States and Canada. According to the protest’s website, occupations in 14 coastal cities—including Los Angeles, Portland, Seattle, Tacoma, and Vancouver—will participate, but they don’t all plan to shut down their respective ports.

The Port of Los Angeles, which adjoins the Port of Long Beach, is the nation’s largest with 43 miles of waterfront—too large to realistically bring to a halt. Michael Novick, a member of Occupy Los Angeles’ general strike preparation committee, said his group instead sees the protest as a “first step toward a general strike” in his city next May. Occupy LA, he said, only plans to picket at one or more SSA terminals at the two ports.

Port of Los Angeles spokesman Phillip Sanfield isn’t especially concerned about a shutdown. He said officials at the port will take a “thoughtful approach” that will “protect the First Amendment and allow people to demonstrate.”

Just as Oakland’s November 2 “general strike” wasn’t really a general strike in the truest sense, the absence of a total West Coast port shutdown won’t prevent the Occupy movement from making another bold statement. An untold number of occupations, from Houston to Denver to Wall Street, have direct actions planned Monday to express support for the port shutdown. Even rail workers in Japan are participating. As at other Occupy events, getting people to show up is half the battle. As Peller asks, “What’s it going to look like when tens of thousands are marching on the coasts?”