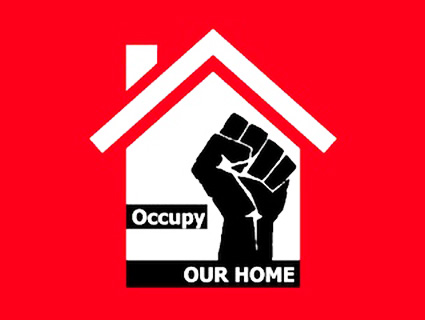 Last Thursday in New York City, a soft-spoken man with a thick beard, whom I’ll call Paul, casually approached a brick apartment building and broke off a padlock with a bolt cutter. A spotter called to say a squad car was on its way, but Paul didn’t feel his phone vibrate; he was too busy jamming a crowbar in the door. “Fortunately, the cop car just drove up the street and turned,” he recalls a few days later as he and his wife wait at a subway stop to meet up with members of his cleanup crew. He’d installed his own lock on the door, which led to a vacant unit where the crew hoped to install a family of squatters.

Paul has asked me not to publish the names of his crew, the location of the building, or too much detail about the single mother who wants to squat there with her two children. The family was evicted from its apartment two weeks ago after a city-subsidized housing program ran out of money. “The reason I am doing this,” Paul told me, “is that there are people who are really hurting.”

After three guys in work clothes showed up with brooms and a shovel, we headed through graffiti-sprayed streets to the building. Everyone would need to be as discreet as possible; a neighboring unit was still occupied by a legal tenant. “The idea is to go in very quickly and confidently, like we are supposed to be there,” Paul tells the group, one of several crews connected to a new 200-member squatting organization known as Organizing for Occupation (O4O).

Today, O4O teams up with Occupy Wall Street and others to launch a campaign called Occupy Our Homes, a public showdown against the big banks and housing authorities. They intend to disrupt foreclosure auctions, unveil secret squats, and announce further plans to defend foreclosed-upon homeowners from eviction in some 20 American cities, as you can see on our map.

Squatting has apparently been on the rise, driven by persistent unemployment, an ongoing foreclosure crisis, and the success of Occupy Wall Street. Reliable stats are hard to come by, since most squatters fly under the radar, but Max Rameau of the national squatting support group Take Back the Land says the number of organizations pursuing the tactic has taken off—from about 15 in July to around 75 in recent weeks. Many of the newcomers are local Occupy groups.

Occupy Our Homes has roots in the early 1970s, when declining working-class incomes and a lack of bank financing for low-rent properties left thousands of New York City buildings abandoned. Hundreds of former tenants squatted in vacant buildings on Manhattan’s Upper West Side, East Harlem, Chelsea, Chinatown, the Lower East Side, and the Williamsburg section of Brooklyn. “We were taking as many as we could,” recalls Frank Morales, a 64-year-old Episcopal priest and longtime squatter. “But in terms of the left, the housing organizations wouldn’t touch us with a 10-foot pole.”

Through the 1980s, Morales helped renovate some 30 squats on the Lower East Side. He lived for two years in an abandoned building with no electricity and half a roof. Using pulleys, his team eventually hoisted up new roof beams. For power, they tapped into the base of a street lamp, burying the cable under the sidewalk and taking just enough electricity to power a single light bulb in each unit.

“Mutual housing, land trusts, whatever the hell you want to call it—you are not going to get in the door until we start taking shit.”

In another building, where the city had ripped out a six-story flight of stairs, he got on the air at a local radio station and recruited a work crew to rebuild the whole thing. “It was like a barn-raising; it was incredible,” Morales remembers. Most of the squats were eventually evicted, but in 2002 New York City granted Morales and other residents of 11 squatted buildings legal deeds to their homes.

In 2009, with the national foreclosure crisis worsening, Morales decided the time was ripe for another squatting movement. This past spring, well before the birth of Occupy Wall Street, he helped found Organizing for Occupation, choosing the “occupation” name because it cut though all the abstractions about affordable housing to make clear that “this is a squatter organization.”

In July, O4O held a national conference that attracted like-minded squatter and anti-eviction groups from around the nation, setting in motion a collaboration that led to today’s activities. “Our goal is to create a community of people who are directly invested in housing each other and defending each other,” Morales says. “The policy changes will come. That’s not my department. Mutual housing, land trusts, whatever the hell you want to call it—you are not going to get in the door until we start taking shit.”

Their overlap with Occupy Wall Street—in geography, ideology, and nonhierarchical structure—has given New York’s squatters a huge shot in the arm. “I try not to use the word ‘squatting,’ but rather the word ‘liberation,'” says Michael Premo, an Occupy Our Homes coordinator who’s been part of OWS from the beginning. His meetings have drawn dozens of former Zuccotti Park campers. He says that, much like OWS, Occupy Our Homes aims “to create a new relationship between land and communities, so communities can control resources to serve people rather than just create profit.”

The increasing political sophistication of the local squatters has convinced some fairly mainstream affordable-housing groups to lend a hand this time. “We are very supportive of what they are doing, and our role is to work in a parallel way with them to develop policy goals,” says Cathy Albisa, executive director of the National Economic and Social Rights Initiative, a social justice and housing group that has been talking with squatting organizers for 18 months. “We have faith that they can change the discourse and we need to be ready to capitalize on that moment.”

“It’s a shame they let this place go like this,” says Hank, a retiree and homeless advocate, as he yanks off slabs of moldy drywall.

Squatting, of course, is not for faint of heart. It’s usually illegal, not to mention grueling. When Paul’s crewmates finally enter the apartment, they crunch across a floor covered in shards of fallen plaster. Mold cakes the closets and doors, and a sheet of peeled-off paint hangs from a corner of kitchen like a giant shirt collar. The bathroom sink is in the tub. The toilet is missing.

In a bedroom I find a can of malt liquor labeled with a “2 for $1” sticker and a 25-cent bag of potato chips, suggesting that the last residents moved out decades ago. “It’s a shame they let this place go like this,” says Hank, a retiree and homeless advocate, as he yanks off slabs of moldy drywall.

The team dons masks and works for hours, scooping debris into garbage bags. With the windows boarded up, there’s no fresh air. My eyes quickly start burning. Aside from Hank’s outburst, everyone works in silence.

After a while, I can take it no longer. I climb the stairs to another empty unit that’s only slightly less ravaged, followed by Mark, a young waiter in a Carhart jacket, who got involved with O4O through Occupy Wall Street. He tells me that in his part of the Bronx some 40 percent of housing is vacant, even as two-bedroom apartments rent for $1,400 a month. One reason seems obvious: Banks are just sitting on vacant properties. “That’s why we have to take this property off their books and do something useful with it,” he says. “It’s the only solution we’ve got.”

“You guys don’t live here,” says a neighbor. “So why are you in here?”

A few minutes later, Mark is standing in the unit’s foyer when the outside door suddenly opens. “What are you doing in there?” asks an accusing voice. It’s the woman who lives next door.

“But you guys don’t live here,” she says, still standing outside on the doorstep. “So why are you in here?”

Paul, the “boss,” has gone for more garbage bags but soon returns. I can hear him talking with the woman on the sidewalk, stuttering to explain that he’s just an employee of some other guy. Skeptical, the neighbor gets on her phone and says, “They’re coming in here and cleaning it. I just wanted to let you know.”

Two men show up. The larger one walks into the apartment and gapes in astonishment at the five of us standing amid the wreckage. “Mohammed!” he yells to the other guy—who is apparently the building supervisor.

“Hey man, you got a house full of people in here, man!”

“You guys gotta get out,” says Mohammed, who is wearing a nice zip-up cardigan and holding a thick ring of keys.

“This apartment has been locked for years!” the big guy says.

“There’s so many apartments, why this one?” the neighbor wants to know. “Go the fuck back somewhere else.”

Paul has stopped trying to pretend he belongs here. “Why aren’t you renting?” he asks the super.

“My boss don’t wanna rent,” Mohammed says. “Unfortunately I cannot answer. My boss is the boss.”

Regrouping over lunch at a nearby burger joint, Mike suggests that the crew target properties owned by banks or the city, or start by building support from neighbors. Paul agrees that they rushed things, but doesn’t feel like they had any other option in this case; the woman who lost her apartment could be on the street within days. His face is creased with worry. “We just don’t have the time,” he says.

With additional production by Hannah Levintova and Tasneem Raja.