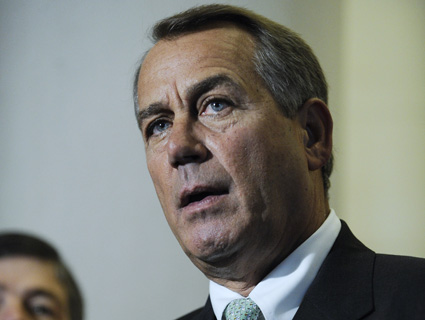 On Thursday night, protesters in Washington, DC, staked out a holiday shindig at the US Chamber of Commerce building where business and political leaders, including House Speaker John Boehner, were said to be in attendance. The protest was organized by Service Employees International Union (SEIU), Chamber Watch, and various occupy groups, and some of the participants said they were out of work or lacked enough work to get by comfortably. Huddling under a red “99%” carpet, they invited the guests to tread on them.

Standing on the street near the entrance to the gauntlet (watch below) was Bruce Josten, a Chamber VP who is basically the business group’s chief lobbyist. He’s the one wearing a three-piece pinstripe suit and tassle loafers, greeting people and encouraging them to brave the crowd. “Hey Greg, how are ya?” I heard him say to one guest, shaking the man’s hand. “This is great. Go on in.”

“This is Bruce Josten’s let-them-eat-cake moment,” commented Christie Setzer of Chamber Watch. I urged her to go talk to Josten, whom she had never met, but she didn’t want to.

Among the people under the carpet was 55-year-old Michelle McDonnell, an Arizona resident whom SEIU paid to fly out and join the week’s protests. McDonnell told me she’d badly injured her ankle two years ago, requiring surgery. She lost her job as licensed therapist because she couldn’t be on her feet, and could not find work in any other field. For a while, she was on food stamps and Access, an Arizona program, but the benefits ran out, and she nearly lost her home to foreclosure by Bank of America. What finally saved her was getting married to a man with an income.

“We are here because of Boehner,” she said. “We want him to stop listening to just the 1 percent and do something that works for all people. We have a lot of people who need jobs, and they are talking about creating jobs, but they are taking jobs away.” Specifically, she wants Boehner to extend unemployment, further reform the healthcare system. “We’re here because we are sick and tired. They are up there eating and having a wonderful party. And we are all here unemployed and don’t know where our next meal is going to come from.”