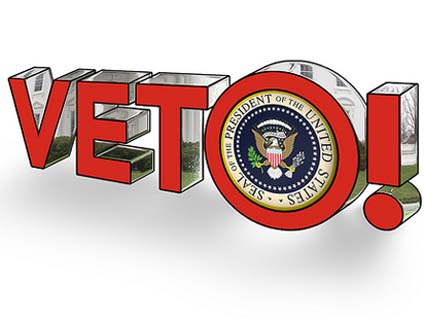 The White House reiterated its threat Friday to veto a defense spending bill that would mandate military detention for non-citizen terror suspects apprehended on American soil.

During Friday’s press briefing, White House Press Secretary Jay Carney accused the Senate of engaging in “political micromanagement at the expense of sensible national security policy,” adding that “our position has not changed, any bill that challenges or constrains the president’s critical authorities to collect intelligence, incapacitate dangerous terrorists and protect the nation would prompt his senior advisers to recommend a veto.”

Thursday evening, the Senate agreed on a compromise amendment to the defense bill to avoid deciding whether current law authorizes the indefinite military detention of Americans suspected of terrorism who are apprehended on US soil. That compromise however, did nothing to alleviate the concerns expressed by top national security officials within the administration, who say the provisions mandating military detention for non-citizen terror suspects could interfere with terrorism investigations and jeopardize national security. Later that evening, the overall bill passed the Senate by a 93-7 vote.

The White House is now in a full fledged standoff with the Senate. If the bill arrives at the president’s desk unchanged, and the president does not veto after saying publicly that the detention provisions would put American lives in danger, the administration risks not only ensuring their objections will never again be taken seriously by Congress, but the accusation that they, rather than Congress, is playing politics with national security.