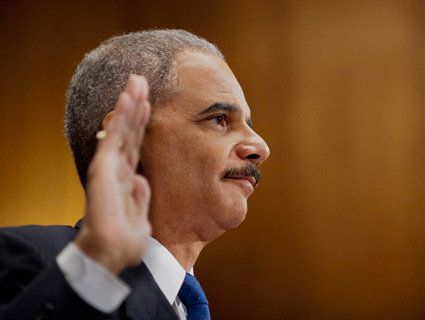 Tea party activists, gun-rights fanatics, and others on the right have recently stepped up their calls for President Obama to fire Attorney General Eric Holder over his handling of the Operation Fast and Furious gun scandal. They’ve persuaded 52 members of Congress, a couple of senators, and many GOP presidential candidates to call for his ouster. Mitt Romney joined the chorus over the weekend, telling reporters in New Hampshire, “Either Mr. Holder himself should resign or the president should ask for his resignation or remove him…It’s unacceptable for him to continue in that position, given the fact that he has misled Congress and entirely botched the investigation of the Fast and Furious program.”

Romney’s comments came just a few days before Holder is expected to testify before the House Judiciary Committee on Thursday, where Republicans are promising a full grilling over his handling of the botched anti-gun smuggling program.

The Bureau of Alcohol, Tobacco, Firearms, and Explosives (ATF) cooked up Operation Fast and Furious in an effort to capture high-level Mexican gun runners who were buying guns in the United States with the help of straw buyers. ATF officials watched as individuals connected to drug cartels illegally bought copious amounts of high-powered weapons in Arizona gun shops that were cooperating with the government. Then, using a technique dubbed “gun walking,” they planned to track the guns up the food chain to ensnare the big-time crime bosses.

From the outset, the program was controversial within the ATF, where agents were unaccustomed to letting criminals walk away with lethal weapons. Then, hundreds of those guns went missing, and some later turned up at grisly crime scenes in Mexico, where they’d been used by members of the Sinaloa drug cartel. The guns have been linked to about 300 deaths in Mexico. When a border agent named Brian Terry was killed in Arizona last December, guns traced to Fast and Furious were discovered at the scene.

In late January 2011, the US Attorney’s office in Arizona unsealed a host of indictments against alleged gun runners caught in the operation, including Jaime Avila, who allegedly bought the weapons found at the scene of Brian Terry’s murder. That’s when mentions of the Fast and Furious operation first surfaced, and it wasn’t long before Terry became the poster child for all that Republicans and tea partiers see wrong with the Obama administration.

In March, the GOP’s designated Obama watchdog, Rep. Darrell Issa (R-Calif.), chairman of the House Committee on Oversight and Government Reform, launched an investigation into the scandal. With the help of ATF whistleblowers, he has relentlessly attacked the administration and Holder over the bungled gun op.

In May, Holder told the House Judiciary Committee that he didn’t know about the ATF plan to let the guns “walk” into Mexico until shortly after Terry was killed. But Republicans claim that documents unearthed by Issa’s committee indicate that Holder knew about the operation much earlier and allege he lied to Congress in his May testimony. Holder has said that the documents, which are essentially weekly briefings that include short summaries of matters of interest from various agencies, don’t show that he was fully briefed about what the ATF field agents in Phoenix were up to. His answers have failed to satisfy Republican investigators.

Almost since taking the helm of the Justice Department, Holder has been a target of conservatives. Activists have hammered him regularly over the past three years, over everything from the Department of Justice’s refusal to investigate the community activist group ACORN to his handling of the New Black Panther voting rights noncontroversy to his attempts to try terrorism suspects in US civilian courts.

But the drumbeat for his ouster has increased substantially of late. With the help of the National Rifle Association, Fast and Furious has become one of the right’s latest conspiracy theories. It goes something like this: Fast and Furious was actually a scheme by Holder to promote gun control. The NRA claims that Holder allowed American gun dealers to sell AK-47s and other powerful assault rifles so that they would be used to kill people in the Mexican drug war, thereby creating the political will for more restrictions on gun ownership in the United States.

The NRA did not respond to a request for comment, but Wayne LaPierre, the organization’s CEO, told Newsmax in October that Fast and Furious was designed “so they could stick more gun legislation on honest American gun owners of the United States.”

The NRA has set up a website called FireHolder.com and has run TV ads accusing Holder of committing perjury. Even without the NRA fanning the flames, the rhetoric over Fast and Furious has been heated. In Phoenix, Pinal County Sheriff Paul Babeu, who’s considering a run for Congress, went on CNN to suggest that Holder and other federal officials involved in Fast and Furious were accessories to murder. That accusation was echoed by Rep. Paul Gosar (R-Ariz.), who told the Daily Caller in October, “When you facilitate that, and a murder or a felony occurs, you’re called an accessory.”

Gosar is one of 52 members of Congress who have asked for Holder’s resignation. Last Thursday, Sen. Charles Grassley (R-Iowa), who has also been investigating the scandal, dressed down Holder and Department of Homeland Security Secretary Janet Napolitano, saying that their claims of ignorance about the operation are implausible. From the Senate floor, Grassley said, “Two of these guns showed up at the murder scene of Agent Terry. And, if that’s not serious enough to brief up to the top of the department, then I don’t know what is.”

Tea party activists are happy to see the issue gathering official attention. “You don’t have to be a right-wing conspiracy nut to say, what’s going on?” says Trent Humphries, the founder of the Tucson Tea Party.

Glen Davis, a member of Arizona’s Williams Tea Party said in an email: “Although you would probably get a variety of answers from various TEA party members, I feel confident in stating that the attitude of most TEA party members is that he should be removed from office with the additional statement, ‘You have the right to remain silent.'”

Holder hasn’t said much about Fast and Furious, largely because he asked the Justice Department’s inspector general to review program and the inquiry is ongoing. In addition, Brian Terry’s murder is still an active criminal investigation, and all of the files related to the prosecution have been sealed so that not even his family, apparently, knows what’s going on with it.

But after Gosar accused Holder of being an accessory to murder, the attorney general fired off a letter to Issa’s committee (PDF) complaining about his treatment. He wrote in October: “I simply cannot sit idly by as a Majority Member of the House Committee on Oversight and Government Reform suggests, as happened this week, that law enforcement and government employees who devote their lives to protecting our citizens be considered ‘accessories to murder.’ Such irresponsible and inflammatory rhetoric must be repudiated in the strongest possible terms…I call on you to denounce these statements.”

Holder dinged the GOP House members for making such a big deal out of Fast and Furious even as they continue to block efforts that would aid federal officials in cracking down on gun smuggling to Mexico, including a rule that would require the reporting of “multiple long gun purchases in a short period of time.” Noting that it was unacceptable for ATF agents to lose track of a single gun during the bureau’s interdiction efforts, he said, “Equally unacceptable, however, is the fact that too many in Congress are opposed to any discussion of fixing loopholes in our laws that facilitate the staggering flow of guns each year across our border to the south…[i]t seems clear that some in Congress are more interested in using this regrettable incident to score political points than in addressing the underlying problem.” Expect the real duel to come on Thursday, when Holder faces off with the GOPers who are gunning for him.