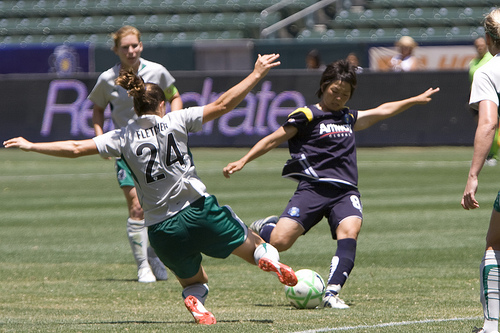 Last night, Women’s Professional Soccer dodged a potentially fatal bullet. Pending agreement to certain conditions, US Soccer, the sport’s governing body, has finally renewed WPS’s professional status for the 2012 season, ending a three-week period of uncertainty over the future of the three-year-old league.

It’s a relief to women’s soccer players, supporters, and fans, who’ve rushed to WPS’ defense over the last few weeks. Yael Averbuch, a midfielder for the Western New York Flash, penned a New York Times column; another professional player, Alexandria Sahle, created a petition, which now has nearly 48,000 signatures, calling on US Soccer to support the league for “the millions of young girls that dream of being the next Hope Solo or Alex Morgan.” A Twitter campaign to #SavetheWPS was born.

The emotional pull of this grassroots effort—“What does this mean for your daughter? Or for your little sister?”—clashes awkwardly with the cold, hard business facts. When it comes to the official guidelines for a professional league, there’s no question that WPS could have been red-carded long ago. The league has lost as many teams as it currently fields since it launched in 2009. With only five teams, it’s short of the eight that are technically required and well below the 10-team minimum suggested by US Soccer for a fledgling pro league in its third year.

In addition to the impassioned appeals to save the league were more pragmatic attempts to grapple with the reality that “passion can’t pay the bills.” From band-aid solutions for the 2012 season—such as allowing the US Women’s National Team to play as a sixth team or make special exhibition appearances as guest players—to a proposal to relaunch the league as a drastically scaled-back enterprise, some tried to figure out how the WPS could save itself.

But can it do so in a long-term, sustainable way? At GOOD, Megan Greenwell argued that WPS’s troubles suggest that it may be time to sacrifice the “dreams of making women’s sports big business” and accept a model in which women’s pro leagues are propped up by their male counterparts. After all, the most successful—or at least most stable and enduring—pro women’s athletics franchise, the WNBA, has been supported and heavily subsidized by the NBA. While Major League Soccer doesn’t come close to matching the NBA in either popularity or profits, many have advocated for, at the very least, a closer relationship between the MLS and WPS—a model that’s worked for semi-professional women’s leagues elsewhere in the world.

Piggy-backing off the men may be an unpalatable idea to many, especially those who are convinced that a self-sustaining WPS is just around the corner. Indeed, buoyed by the excitement of last summer’s Women’s World Cup, the 2011 season ended on a high note. (Then again, that’s the kind of optimism that existed after the 1999 Cup—and WPS’s predecessor, WUSA, folded just three years later.) As Val Ackerman, the WNBA’s first president, recently wrote, “[W]e at some point need to begin weaning ourselves off the largess of the men’s sports establishment and start putting more of our own skin in the game.”

It’s just not clear that we’ve reached that point for women’s professional sports in the United States. Passion may not pay the bills, but maybe it’s time to figure out a way that it could.