A little more than two years ago to the day, while locked in a tight race with Republican Scott Brown for the vacant Massachusetts Senate seat, Martha Coakley, the state attorney general, offered up the quote that no number of foreclosure fraud lawsuits will be able to wipe from her obituary. Asked about her hands-off campaign style, she pushed back: “As opposed to standing outside Fenway Park? In the cold? Shaking hands?” 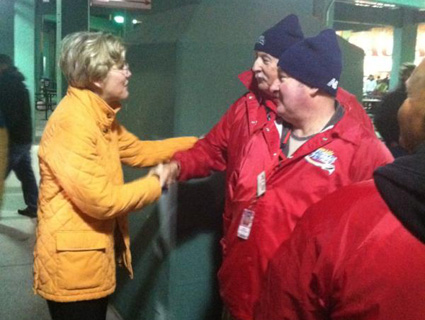 As for Warren’s campaign, the most recent survey of the race, from the Boston Herald, gave her a seven-point lead over the incumbent. And Brown appears to be feeling the heat. Last Monday, after Obama announced he’d appointed former Ohio Attorney General Richard Cordray to chair the Consumer Financial Protection Bureau—crafted by Warren—Brown broke with his party to endorse the move: “I support President Obama’s appointment today of Richard Cordray to head the CFPB. I believe he is the right person to lead the agency and help protect consumers from fraud and scams.”