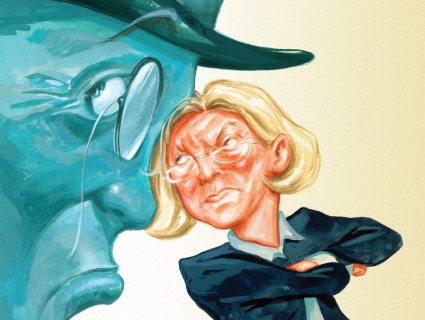 A month into her Senate campaign, Elizabeth Warren is at Tito’s Bakery in Chelsea, Massachusetts, finding her sea legs. It’s her first-ever appearance in this Boston suburb, meaning she’s now officially spent as much time here as Martha Coakley, whose hapless showing in the January 2010 special Senate election against Republican Scott Brown is the reason Warren is running in the first place.

Warren schmoozes with the Argentine-born owners—”I loooooove bakeries,” she says, with a slight Oklahoma drawl—and listens, arms folded, as a local recounts Chelsea’s transition from affluent suburb to immigrant enclave. Warren, a Harvard Law School professor, eases patrons in and out of the conversation as if she’s directing traffic, her eyes widened in a look of perpetual concern.

“Partly we are all subject to the whole influences of history,” Warren jumps in, slipping briefly into lecture hall mode. “But it’s also a decision by government: China is investing in infrastructure, building more roads and more bridges. Last year China spent 9 percent of GDP on infrastructure. The US is at 2.5 percent. The implications of that over five years—over 20 years—will be devastating.”

That, in essence, is the idea driving Warren’s unlikely candidacy—that the federal government has ceased to invest in what made America great. “We live in an America that has hammered, chipped, and squeezed the middle class,” she tells a senior-center audience the next day. Like Occupy Wall Street and the brawls over union rights in Wisconsin and Ohio, Warren’s race to retake the late Teddy Kennedy’s seat from Brown has become a proxy war in the fight for the middle class. The race will almost certainly be one of the most expensive and most talked about of 2012. In just the first two and a half weeks of her candidacy, Warren raised $3 million; Brown already had more than $10.5 million in the bank.*

But Warren also has something money can’t buy. She’s managed to capture a force that had been missing and feared lost since at least 2009: liberal enthusiasm. She’s drawing the kinds of crowds—around 400 volunteers on a weeknight—most candidates only dream of. And like Brown, whose blue-collar vibe was so conspicuous that the Boston Globe profiled his barn jacket, Warren has connected with disaffected voters despite her Ivy League bona fides. “We’re the hick vote!” a supporter in Springfield gushes, referring to Warren’s Sooner roots. “I love it!” Warren exclaims.

Warren’s political narrative isn’t a conventional one. She left Oklahoma City for college at 16, married at 19, and had her first child at 22. After law school, she landed jobs at five schools before ending up at Harvard, where she focused on the struggles of average Americans; her 2004 book, The Two-Income Trap, argued that the single best predictor of bankruptcy is having kids.

In July, after months of speculation, President Obama passed over Warren in picking the head of the Consumer Financial Protection Bureau, the agency she had spent three years fighting to establish. She was opposed by what she calls “the largest lobbying force ever assembled on the face of the earth.” Between 2009 and 2011, the financial, insurance, and real estate sectors employed some 2,500 lobbyists in Washington—and Warren’s agency was directly in their crosshairs. One banker called her “the Antichrist.”

Meanwhile, Warren had become a progressive icon. Jon Stewart joked about making out with her. For months, she deflected questions about her political aspirations, telling the Wall Street Journal that she’d rather “stab myself in the eye” than return to Washington. She then jumped into a crowded Democratic field in September. But that was the easy part. In order to beat Brown, she’ll have to confront the same forces that sent her packing from DC.

Conventional wisdom has always portrayed Brown’s win as a coup for tea partiers irate over Obamacare, but in fact it was a triumph for Wall Street, which poured $450,000 into his coffers days before the election. Those donors recognized that whatever happened to health care reform, Brown would be a swing vote on financial reform—and because his seat was so vulnerable, he’d need to keep coming back for more support. To the dismay of Wall Street watchdogs, Brown bottled up the Dodd-Frank financial reform bill for months. Only after he’d succeeded in gutting key provisions, including a bailout tax on banks and the anti-speculation Volcker rule, did he vote yes. Since then, the Wall Street money has continued pouring in.

Opponents have seized on Warren’s more dramatic turns of phrase in an attempt to portray her as an eat-the-rich radical—less Robin Hood than Patty Hearst.

Warren’s campaign has already blasted out emails branding the election as “Wall Street vs. You.” But she, too, will need big-money support, and conservatives have already zeroed in on her backers, from George Soros to “special interests” like the League of Conservation Voters.

Just as Warren is going after Brown as Wall Street’s candidate, Brown seems determined to tar Warren as the Occupy movement’s stand-in. Massachusetts Republicans have dubbed her the “Matriarch of Mayhem” and “Queen Elizabeth.” They’ve seized on her more dramatic turns of phrase (she once said she’d prefer “plenty of blood and teeth left on the floor” to a neutered consumer protection agency) in an attempt to portray her as an eat-the-rich radical—less Robin Hood than Patty Hearst. The week of her swing through Chelsea and Springfield, Warren let slip to a Daily Beast reporter that she considered her work the “intellectual foundation” of Occupy Wall Street; she was promptly attacked for, at best, overinflating her influence and, at worst, condoning hooliganism.

“I need to be a little more careful in my sentences,” Warren says, sitting in a booth at Tito’s. She’s still new to the candidate thing, still figuring out that what works well in casual conversation works less well when you strip away the context, set it to trance music in a minor key, and loop images of unkempt protesters across the screen—which is just what the Massachusetts GOP did in an online ad. During our interview, she periodically pauses midthought and restarts her answer. Or she grabs my wrist and says, “I should stop there. Right there. Mmmhmm, I’ll just stop.”

She already has her own opposition tracker, a redheaded twentysomething with a hoodie and a video camera who would only tell me that he doesn’t work for Brown. At an organizing session in Framingham, the tracker tries to film a huddled conversation between Warren and a staffer, forcing another aide to jump in to obstruct his view; in Springfield, Warren turns the tables by asking the tracker to take a picture while she poses with a supporter.

So can she win? After trailing Brown when the race was first polled early last year, Warren has seen her fortunes improve; a December survey from UMass-Lowell and the Boston Herald put her on top by seven points. Unlike Coakley, she’ll share the ballot with Obama and other Democrats, meaning that the party’s local machines will have no choice but to get out the vote—something they were accused of slacking on last time around. She’s tapped Doug Rubin, who steered Democratic Massachusetts Gov. Deval Patrick to reelection last November, as her top strategist.

Brown’s approval ratings have declined significantly over the last year (from as high as 73 percent to as low as 44 percent), but he still has strong support from independent voters. Warren is undeterred. “I’ve gone toe-to-toe with some of the most powerful corporations out there in this country,” she says. “Toe-to-toe with the largest financial institutions. And toe-to-toe with people in our own government.” She pauses for effect and gives the table a light rap with her fist. “I don’t plan to stop. Ever.”

*Update: On Wednesday, January 11, the Boston Globe reported that Warren had raised $5.7 million in the fourth quarter of 2011—significantly more than Brown, who took in $3.2 million over the same period. But Warren still trails Brown in cash on hand, $12.8 million to $6 million.