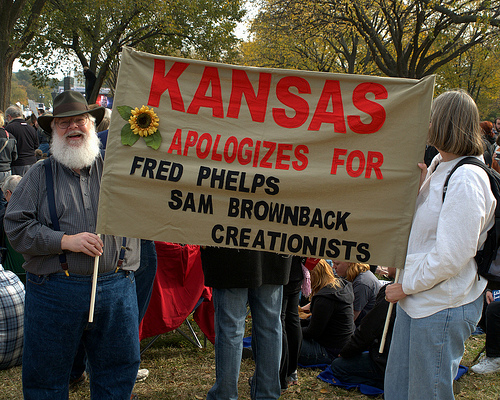 On Friday, Kansas Governor Sam Brownback released a long list of state statutes that he thinks are outdated and should be tossed out. He even issued an executive order last year to create a new position, the Office of the Repealer, to come up with that list. But his final product did not include the repeal of the state’s anti-sodomy law.

Despite the fact that the Supreme Court ruled that anti-sodomy laws were unconstitutional in 2003, Kansas has kept its own law on the books. Kansas Statute 21-3505 lists “criminal sodomy”–that which occurs “between persons who are 16 or more years of age and members of the same sex or between a person and an animal”–as a misdemeanor. Straight sodomy is a-OK.

Even though the state sodomy law is pretty much moot in terms of enforcement, it still has an impact on the lives of gays in the state, as the New York Times reports:

The decision, despite public and private lobbying, has angered gay leaders here. “We were pretty much the first in line with our request to have this unconstitutional ban on gay and lesbian relations repealed,” said Thomas Witt, chairman of the Kansas Equality Coalition.

“This isn’t just some archaic law that’s sitting on the books and isn’t bothering anyone,” Mr. Witt continued. “It’s used as justification to harass and discriminate against people, and it needs to go.”

And in case you’re wondering what other states continue to consider sodomy illegal, Tim Murphy created this handy map.