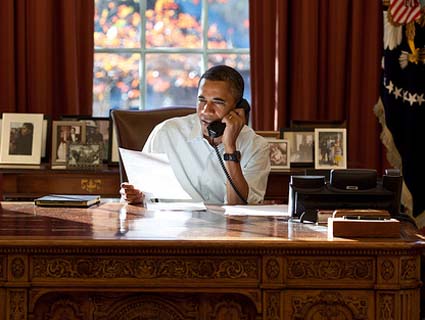 The Justice Department released its legal justification for Obama’s appointments to the National Labor Relations Board and the Consumer Financial Protection Bureau Wednesday, which states that the president has the authority to make appointments even when Congress is technically not in recess.

Republicans had sought to block Obama from making any recess appointments by using brief “pro-forma” sessions (in which no actual business is conducted) while legislators were away. It’s a procedural maneuver used by legislators to prevent recess appointments by making it so that Congress is technically not in recess. Since the Constitution states that both houses must agree to adjourn, it was easy for the Republican-controlled House to prevent a “recess” even as lawmakers went home for the holidays. In particular, Republicans were seeking to make the administration’s new consumer watchdog agency useless by leaving it without leadership.

“When Congress creates an office, but doesn’t allow the president to fill it, that’s going to force the president to consider what other options he has,” says Michael Gerhardt, a constitutional law professor at UNC Chapel Hill.

The opinion from the Office of Legal Counsel, authored by Assistant Attorney General Virginia Seitz, argues that these “pro forma” sessions, which have historically been used by both parties to deny presidents the ability to make executive and judicial appointments, can’t be used to block appointments unless the Senate is conducting actual business. The job of the OLC is to provide advice to the executive branch to ensure its actions comply with the law—although at moments under the Bush administration, OLC attorneys turned into virtual rubber-stamps for whatever actions the administration wanted to pursue.

Seitz writes that “while Congress can prevent the President from making any recess appointments by remaining continuously in session and available to receive and act on nominations, it cannot do so by conducting pro forma sessions during a recess.” Seitz points out that legislators have frequently referred to times of prolonged absences as “recesses,” even if Congress had not technically adjourned. (As Jonathan Bernstein noted, Tennessee Republican Rep. Diane Black said the president’s appointments were unconstitutional because Congress was not in recess, before complaining that the nominees were put forth “a mere two days before the Senate recessed for the holiday.”) Even the administration’s supporters however, have generally acknowledged that the legal questions here are a close call, and Seitz acknowledges there are “substantial arguments on each side.”

“[The opinion] is admirably forthright and candid about the closeness of the question and the arguments on the other side,” says Marty Lederman, a former attorney with the Office of Legal Counsel who, as counsel to Senator Ted Kennedy, had argued that such appointments were not constitutional. “It doesn’t hide anything.”

The OLC’s opinion should end speculation, put forth by conservatives like David Addington, former legal counsel to Vice President Dick Cheney, and even more progressive voices like Bruce Ackerman, that the president had not asked for advice from the Justice Department before making the appointments. The implication from some critics was that the administration knew the appointments were unconstitutional, and therefore didn’t ask.

The opinion itself is dated January 6, two days after the appointments were announced—but that doesn’t mean the opinion was sought retroactively. “It is common, especially where time is of the essence, to give legal advice prior to a formal written opinion,” Lederman says. “It takes time to produce an opinion with this level of detail.”

The opinion relies on previous memos written by Republican and Democratic officials, and it does marshal some strong historical evidence for its interpretation. The opinion quotes Alexander Hamilton writing that the recess clause of the Constitution is triggered when the Senate is not “in session for the appointment of officers,” a sentiment echoed by a Senate Judiciary Committee letter from 1905 informing President Theodore Roosevelt about the limits of his authority to make recess appointments.

The opinion would seem to extend to judicial appointments as well. Under the Justice Department’s argument, Obama could have recess appointed every federal judge waiting for an up or down vote but chose not to. However, the power of judges comes in part from their ability to remain on the bench for life, which would be diminished by a time limited recess appointment. Obama’s successors, however, may feel differently.

“This is one opinion that is likely to be followed by future presidents,” Gerhardt says. “It’s not easy to overturn opinions of the [Office of Legal Counsel], as the history of the [Bush-era] Torture Memos demonstrate.”