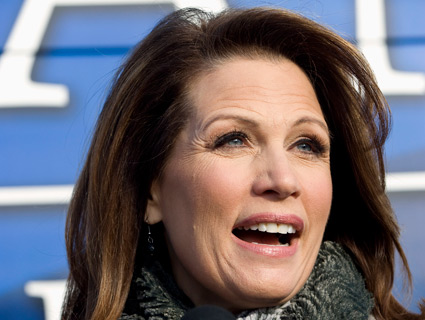 Bachmann campaigns at a Rock the Caucus event on the morning of the Iowa caucuses. Brian Cahn/ZUMA

Minnesota congresswoman Michele Bachmann dropped out of the GOP presidential race on Wednesday morning in Des Moines after a fairly disastrous sixth-place finish at the Iowa caucuses. “I believe that if we are going to repeal Obamacare, turn our country around, and take back our country, we must do so united,” explained the one-time front-runner, whose campaign began to collapse almost immediately after her triumph at the Ames Straw Poll in August. “And I believe that we must rally behind the person that our country and our party and our people select to be that standard-bearer.” In characteristic Bachmann fashion, she left her audience with a dire warning: If Americans don’t elect the right candidate next November (she wouldn’t suggest who that might be), the United States would become a socialist country. Take it to the bank.

Bachmann’s campaign might be history, but no one can ever take away the memories. She represented—to paraphrase Kennedy—the greatest collection of paranoia, factual inaccuracy, and overheated rhetoric since Herman Cain dined alone. And she will be missed. Here’s a quick look at the road we traveled:

Why does the GOP race suddenly seem a little less marvelous?