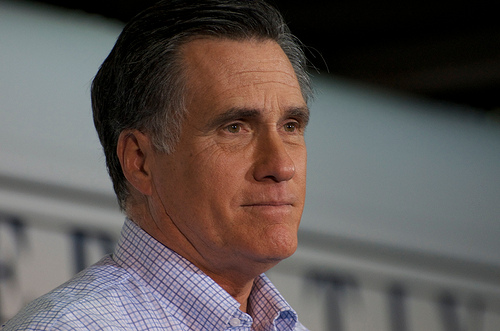 On Sunday, Mitt Romney said he knew the pain felt by Americans on the brink of unemployment. “I know what it’s like to worry whether you’re going to get fired,” he said. “There were a couple of times I wondered if I was going to get a pink slip.” But when pressed by the New York Times later that day, the Romney campaign couldn’t come up with a single occasion when Romney thought he’d actually get the pink slip.

A day later, at a factory in Hudson, Romney was asked for specifics on his pink slip claim. He replied, “I came out of school and I got an entry level position, and like anybody who starts at the bottom of an enterprise, you wonder when you don’t do so well, whether you’re going to be able to hang onto your job.”

“Well, as you probably know in your profession, you never quite know what’s gonna happen. And I think people imagine that I came in at the top of Bain and Company, the consulting firm, or the Boston Consulting Group. I started at the bottom.

“I came out of school and I got an entry level position, and like anybody who starts at the bottom of an enterprise, you wonder when you don’t do so well, whether you’re going to be able to hang onto your job and you wonder if the enterprise gets in trouble, will you be one of those that’s laid off. That’s what happened to a lot of people around the country today and it breaks your heart to see people lose their jobs. Like anybody else in the private sector knows, there’s some prospect that you might lose your job.”

To be clear, accounts of Romney’s rise at Boston Consulting Group and Bain and Company (not be confused with Bain Capital, the private equity firm he was tapped to lead) don’t quite depict him as a Horatio Alger-type. His story is certainly a far cry from that of, say, Lewis Ranieri, the legendary investor who started at Solomon Brothers in the mailroom. Romney was a prized commodity coming out Harvard Law School and Harvard Business School, and succeeded right out of the gate at both BCG and Bain.

The question is, will voters in New Hampshire and elsewhere sympathize with Romney’s claim that he feared the pink slip at BCG and Bain? Or will they chalk it up as the usual faux populism spouted all too often on the campaign trail?