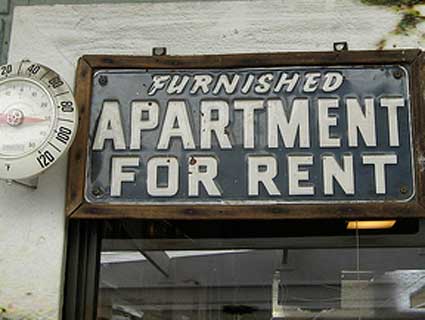 More Americans are renting homes while the number of homeowners is on the decline, according to a recent Morgan Stanley report. The report, published last July but recently making its way through the media, finds that in 2011 the number of owner-occupied homes in the US declined by 644,000 from 2010. The number of vacant rental properties, meanwhile, decreased by 132,000 from 2010. Taken together, the numbers suggest a growing trend of American renters, so much so that Reuters predicts 2012 will be the “year of the landlord.”

“This is the first time in history where there’s an opportunity for institutions to own single family rentals as part of a larger asset allocation strategy,” the report’s author Oliver Chang recently told CNBC.

The downturn in home ownership is especially true among young adults, according to Rick Palacios Jr., senior research analyst at John Burns Real Estate Consulting, a company that analyzes social and economic trends for the housing industry. Last month Palacios told the Chicago Tribune that among 25 to 35 year olds, “almost 6 million in that age group now live with mom and dad, up 26 percent from the beginning of the recession in 2007. Many others are renting. But certainly, few are buying.”

What’s concerning about this trend is that rights for renters in the US, though they vary across states, are generally weak. Emily Badger sums up the plights of the American renter in the Atlantic:

There’s something fundamentally demeaning about being a renter about having to ask permission to change the showerhead, about having to mentally deduct future losses from deposit checks for each nail hammered into the wall to hang family photos. There’s something degrading about the annual rent increase that comes with this implied taunt to its captive audience: What are you going to do, move out?

Adding to the concern is that larger institutions (or the property management companies they hire to oversee their “bulk properties” investments) don’t necessarily make great landlords. (New York City Public Advocate’s “Worst Landlords Watchlist” lists corporations like 1071 Home Corp. and Maristanc Corp. as some of the worst offenders.) More American renters could also mean more Americans who are vulnerable to unstable or unsafe housing conditions.

But more renters doesn’t have to be a bad thing. Strengthening renters’ protections, for one, can go a long way. One useful model can be found in in Germany, which has a stable, low home-ownership rate of around 43% and one of the strongest economies in Europe. Leasing an apartment there doesn’t come with the same risk of eviction and skyrocketing rents in part because the country’s strong tenants rights. Global Property Guide, a website aimed at “residential property investors who want to buy houses in other countries” went as far as to describe German landlord-tenant laws as “depressingly pro-tenant”.

In Germany, a Guardian article explains, landlords typically can’t increase rent by more than 20 percent over three years, and it’s routine for the tenants’ association to contest excessively high rent. Compare this to rent control laws in New York City, where property owners are allowed to raise the rent up to 7.5 percent each year provided the rent does not exceed a predetermined maximum base amount. Only 64 percent of rentals in New York City are classified as rent-stabilized, rent-controlled, or low-income housing, and the number continues to decline.

Renters’ rights in the US lag far behind Germany in other ways, too. The main piece of US legislation that currently protects renters is the Fair Housing Act of 1968. The bill prohibits landlords from discriminating against tenants because of race, color, religion, sex, familial status, national origin or disability. The Fair Housing Act doesn’t address rent control, stabilization and extension rights for those living in property that’s been foreclosed, and availability of these protections varies from state to state.

There are some signs that renters’ rights are improving. The Los Angeles City Council’s extension of an ordinance that prevents lenders who foreclosed on property from immediately evicting tenants last December was widely praised by renters’ rights groups. But Larry Gross, head of the Los Angeles-based Coalition for Economic Survival, says the struggle for tenants rights in the US is still largely a “cat and mouse game.” Landlords in the area are now threatening eviction for those tenants who don’t pay their rent online—including many low-income and elderly people.

Renters won’t have it much easier this year, and low-income residents will likely be hit the hardest. According to a study by Harvard’s Joint Center for Housing Studies, 33 percent of renters with annual incomes between $14,500 and $30,000 currently face “severe burdens” in finding affordable rent. And as of December, landlords in Wisconsin can legally refuse a tenant because of income, criminal background or credit score.

Renters will continue to be exploited, Gross says, “until there’s a recognition that housing is a human right and all people should have a roof over their heads that they can afford.”