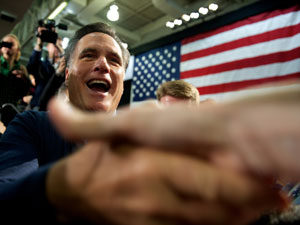 ?The Republican presidential contest—as it has played out in New Hampshire during the days prior to Tuesday’s primary—has been a battle between anger and outrage. Mitt Romney, the front-runner, gets worked up—in a Brahmin style—that President Barack Obama, a nice enough fellow, is simply not up to task of leading this great nation and doesn’t quite understand the essence of American society. Newt Gingrich, Rick Santorum, and Ron Paul are outraged, absolutely outraged, that Obama is purposefully leading the nation to ruin. The basic choice for Republican voters in the Live Free or Die state: be mad or be damn mad.

??At campaign stops, Romney routinely shares his dark view of Obama and the present perilous moment. In Derry, New Hampshire, this weekend, he told a few hundred people, “What frightens me today is that we have a president I don’t think who understands the nature of America—the power of opportunity and freedom. I want to bring these things back to America so we have a brighter future.” And he maintained that the 2012 presidential election is “about the soul of America. Are we going to remain true to the principles that the nation was founded on? Are we going to remain a merit society?” At the first of two debates, Romney warned that Obama “wants us to turn into a European-style welfare state and have government take from some to give to others.”

??Romney, a quarter-of-a-billionaire, never explained whether he opposes all redistributive programs—say, Medicare, Pell grants, and the like. But his basic case was that Obama would rather steal your wealth (his wealth?) than trust good ol’ American ingenuity to create more wealth. Obama, Romney declared at that debate, “has put America on a road to decline.” And, he has warned, if you folks don’t stop him, you’ll all end up living in—gasp!—Sweden.

For some, that is indeed a nightmare (despite the success of The Girl with the Dragon Tattoo). But Santorum and Gingrich go far beyond this dour vision of an Obamaian future. ??

Santorum, who hasn’t appeared to have fully capitalized on his Iowa bump in New Hampshire, has been railing against Obama for plotting to diminish freedom and individual liberty—for seeking to preside over a society “where the government rules the citizenry, not the reverse.” Like Romney, Santorum has routinely charged that Obama doesn’t believe in American exceptionalism. At a campaign stop in Concord, Santorum told a conference of college students that the founding of the United States—due to the nation’s embrace of free markets and faith—led to the transition in Western nations from agrarian societies to industrial societies, and the subsequent shift to technological societies. Life expectancy, he claimed, did not change from the time of Jesus until the birth of the United States—it stayed at about 35 years—but then, with these changes, drastically increased as the faith-based new country led the way to a new era.

??Yet now, Obama, the baby-faced Santorum proclaimed, is literally destroying (not just misunderstanding) the foundation of American society, as he and his relativist ilk refuse to adhere to absolutes. (“I do not believe life begins at conception,” Santorum told those college kids, “I know that life begins at conception.”) Obama, he charges, wants to play God, believing “we need leaders more capable of ruling us then of us ruling ourselves… Trust the planners, the smart people…our own nobility…who can do things better for us than we can do ourselves.”??At his final rally before Election Day, Santorum—whose campaign slogan is, “the Courage To Fight for America”—went all in: “If Barack Obama is reelected, then America as we know it will be gone. We will be a statist country. We will be a country that is no longer independent…The government…will control us.” His crowd of supporters—jammed into a pool-hall pub—cheered. Santorum, it seemed, was literally fighting for American independence.??

Gingrich has been preaching a similar poli-apocalyptic vision. Speaking to employees at a power company in Manchester the day before the election, he called Obama “the most radical president in American history.” And in Gingrichian fashion, he pronounced 2012 ” the most important election of modern times.” That’s because the question at hand is whether the United States remains a nation “where citizen is sovereign and the government is servant…or becomes a European society…where government is sovereign and the citizen is servant.” And he one-upped Romney: Obama’s grand plan was not to turn the country into a European-style social welfare society, but a “secular” and “radical European socialist” nation. (Rick Perry, who made a cameo role in the New Hampshire contest by appearing at the debates, was a bit more blunt: “We have a president that’s a socialist. I don’t think our founding fathers wanted America to be a socialist country.” Socialism, it should be noted, was not quite around in the 1770s.)

??You get the picture. Romney has voiced concern that Obama is an anti-American Robin Hood who wants to swipe the hard-earned cash of American taxpayers and hand it to others. Santorgrich believes Obama is hell-bent to crush faith and freedom in the United States. There is a slight difference. Saving the auto industry, crafting tax-cut compromises, negotiating spending cuts, lowering taxes for middle- and lower-income Americans, the Osama bin Laden raid, proposing investments in education, innovation, and research and development—none of that matters. The bottom line, in both iterations, is that the president is not a true American. For Romney, this is a matter of dollars and cents. For Gingratorum, this is a matter of profound theological and cultural significance.

??Ron Paul, during his campaign rants against the current state of affairs, does not tend to cite Obama as an exceptionalist when it comes to demolishing US society. His target is the entire power structure, of which Obama is merely one player. Paul wants to tear down the entire system—before it implodes on its own, which, in his telling, could happen at any second. (Gold and silver!) Jon Huntsman refreshingly evinces disappointment in his former boss, not outright anger. He is trying to pitch a reasonable critique—”leadership,” he says, is “not about…vilifying”—and it hasn’t gotten him too far yet.

??But the overarching thrust of the GOP attack on the president in New Hampshire has not been that he’s to blame for a crappy economy. It’s that he is not one of us and that the election at hand is not a face-off over policy disputes but a clash over the future of the idea of America. Romney, Santorum, and Gingrich are essentially calling the president a foreigner (Europe, Europe, Europe!) and campaigning to purge this country of Obama’s otherness. It’s an ugly narrative for ugly times.