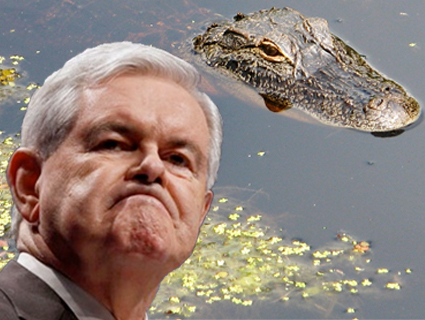 With three candidates each boasting one primary victory, Florida is partying like it’s 2000: another pivotal ballot with presidential implications and the whole nation watching. The winner of next Tuesday’s Sunshine State ballot has the clearest path to the Republican nomination. So if you’re Newt Gingrich, high off your South Carolina comeback, how do you win with Republicans in a super-state where Mitt Romney’s better-organized, better-funded, and (maybe) still ahead? One hail-mary idea is to connect Romney to the state’s most famous GOP defector. Rick Tyler, the ex-Gingrich spokesman who now advises Newt’s super PAC, Winning Our Future, plans to do just that.

On one level, it’s a sound red-meat strategy: Romney’s ground team in Florida includes a trio of political insiders who worked for Crist’s unsuccessful independent Senate campaign in 2010. But while Gingrich might score some quick primary points by associating Romney with a moderate pol, it’s likely to screw him in a general election. That’s because in the past two years, Charlie Crist has returned from the dead to become one of the state’s most popular politicians.

Back during the 2010 tea party revolution, Rubio crushed Crist in the GOP primary for Florida’s open seat. Rubio’s strategem was to paint Crist as a moderate Republican-in-name-only. In response, Crist fled the party and ran against Rubio in the general election as an independent, only to be crushed by 20 percent. But as they say in Florida, the rules are different here. Two years on, Rubio’s ditched his tea party cred to vote regularly as a moderate; he’s even cooperated with Sen. Bill Nelson, his senior colleague and a stolid Democrat, on a host of bills.

Crist’s fortunes, too, have shifted. Now a high-powered attorney in St. Petersburg, he’s sat back while state Republicans have taken a blowtorch to Florida’s government…and essentially scorched themselves. His gubernatorial successor, the tea party billionaire Rick Scott, is the least popular governor in America, with a 26 percent approval rating, and the GOP-dominated state Legislature doesn’t fare much better.

By contrast, Public Policy Polling found just last month that Crist is again one of the state’s darlings, with a 48 percent approval rating—and if he were to become a Democrat and challenge Scott for the governorship, he’d wallop the former health care executive 55 percent to 32. And that’s among a polling sample where two-thirds identified themselves as moderate to very conservative. In other words, Crist is pretty popular across the board, and especially so with independents, who are sitting this week’s circus out.

The poll merely confirmed what you could already feel in Florida’s humid atmosphere, from Pensacola to Big Pine Key: A vote against Crist these days is a vote for Rick Scott, and virtually nobody likes Rick Scott. In fact, no matter who wins the GOP nomination, the Republicans will have a huge problem trying to figure out where to stash Scott at their nominating convention in Tampa this fall. Somewhere behind a potted palm is a safe bet.

Simply put, Winning Our Future’s Romney-as-Crist gambit might help Gingrich ever so slightly in a conservative-dominated primary, where voters gave Crist the boot two years ago. But calling Crist the enemy just paints the Republicans as hopelessly out of touch with Florida’s general public. Were Newt to squeak through to November, his Sunshine State attacks on Comeback Charlie might leave him out in the rain.