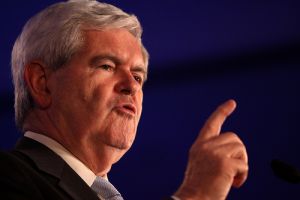 Newt Gingrich’s biggest applause in Atlantic, Iowa, on Saturday wasn’t his condemnation of President Barack Obama as a “Saul Alinsky radical.” It wasn’t his pledge to destroy Obamacare. It certainly wasn’t his name-drop of consulting pioneers Edwards Deming and Peter Drucker. It was his promise to bring the troops home, declare defeat, and end major combat operations in the War on Dust.

Referring to the Environmental Protection Agency as a “job-killing dictatorial bureaucracy,” Gingrich invoked the name of one of the state’s leading Republicans to make his case. “Many of you have probably followed Sen. Grassley’s fight for the dust regulations,” Gingrich says. “The EPA technically has the ability to regulate ‘particulate matter,’ as part of the Clean Air Bill, which I don’t think any congressman thought of as ‘dust.’ But of course it’s now interpreted to include dust. If you were to plow on a windy day, and some of the dirt was carried by the wind into your neighbor’s field, you would be polluting your neighbor’s field with your dirt. Now, since your neighbor’s field is exactly the same geologic dirt as your field, it’s implausible that you would actually be hurting it.”

“I was in Arizona, I was explaining what Sen. Grassley was fighting, and they say, ‘Oh, it’s worse than that.'” Gingrich says. “They had an official come down for a meeting and they were trying to explain to him that because Arizona is a desert, you have naturally occurring dust storms*. And the [official] said to them, well, have you considered wetting down the dust.” Gingrich mugs a little bit, and the crowd laughs. “And they were looking at him, and they said, ‘You know, the reason they call it a desert is we don’t have any water.'” Smiling, Gingrich offers this as just one reason why he’d replace the EPA with a new agency, the—euphemism coming—”Environmental Solutions Agency,” the number-one priority of which would be… “competence.”

It’s a good story, and the audience eats it up; it just sounds right. “If you can solve 90 percent of a problem for a billion dollars, they’ll try to solve 95 percent of the problem for $100 billion,” says Steve Koll, a postal worker from Atlantic. He’ll be giving a speech on Gingrich’s behalf at his caucus on Tuesday. “It’d be nice to have the  smartest guy in the room representing us for once.”

But the EPA does not regulate dust as we might think of it, at least not the kind of dust you’d laugh at if a candidate brought it up in a speech. Instead, they go after “particulate matter,” which, although it just sounds like a euphemism for dust, is actually a euphemism for “things that will produce uneconomic health and envrionmental effects if you breathe too much of them.” Soot would be the best example (and incidentally, something the EPA has been pretty lax about), or coal dust. Contra Gingrich’s assertion that the agency had taken the initiative to looking into regulating dirt, the EPA was required by law to review its standards on particulate matter to make sure that it was keeping up with the science. That was interpreted by the agriculture industry as a sign that new regulations were imminent, but EPA chief Lisa Jackson told Congress she had “no plans” to regulate dust, and, sure enough, no new regulations were issued. 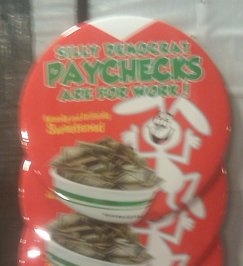 For sale at Gingrich’s event in Atlantic, Iowa: “Silly Democrat: Paychecks are for Work!”: Tim MurphyIn a passive-aggressive letter to Congress in October, Jackson wrote: “EPA has repeatedly said that it has no plans to tighten this regulation. As further proof and upon careful consideration of the scientific record, analysis by Agency scientists, and advice from the independent Clean Air Science Advisory Committee, EPA today wrote Congress that it is prepared to propose to keep the current standard for PM10 when it is sent to OMB for interagency review. EPA hopes that this action finally puts an end to the myth that the Agency is planning to tighten this regulation which has been place since 1987.”

But one of Iowa’s perks as the first-in-the-nation nominating contest is that its issues suddenly become our issues. And even if there’s no real effort to regulate dust, the agriculture industry and its various component parts (except, perhaps, the laborers who have to breathe the stuff) do have a short-term incentive to fight particulate matter regulations—and demonize the EPA more broadly.

Which is why Gingrich talks up dust regulations in his speech, and promises to replace the EPA with a business-friendly alternative. Rick Perry has a line he likes to use about the impact of emissions standards on John Deere tractors, which he claims will increase the price of equipment by $20,000. He’s also concerned the Obama administration will move to prevent anyone under the age of 18 from operating farm equipment, and that the USDA will force you to get a commercial driver’s license for your tractor, even if you’re just crossing the road to get from one part of your land to another (this is false). Ron Paul at least stays true to his libertarian beliefs when he pledges to eliminate the Department of Agriculture and legalize the sale of raw milk. Before he dropped out of the race, Herman Cain had parroted the dust myth, too.

*These are called haboobs, which is an Arabic word. This is something of a sore spot with Arizonans.