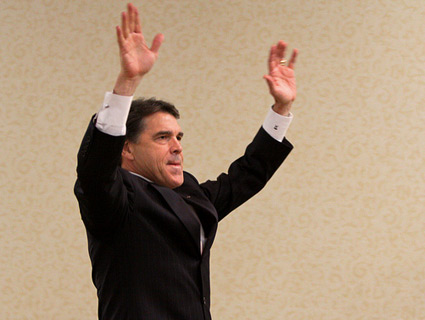 Woe is the injured consumer or medical patient in Texas who brings a lawsuit against a big corporation or the government. A new report out from the nonprofit advocacy group Texas Watch has taken a hard look at more than 600 decisions by the Texas Supreme Court over the past decade and found that consumers and plaintiffs are routinely taking it on the chin. And consumers are losing far more often in the court than they were before short-lived GOP presidential candidate Rick Perry became governor.

Since 2005, consumers have lost nearly 80 percent of Texas Supreme Court cases in which a consumer was pitted against a big corporation or the government. Most of the time, the consumer plaintiffs had already prevailed before a jury—the high court overturned jury verdicts in 74 percent of consumer cases, with very little dissent.

Texas Watch attributes the massive scale-tilting to the fact that the court is now dominated by judges who were appointed by Perry starting in 2000. Six of the nine judges on the all-Republican court were initially appointed by Perry. In Texas, the judges are elected, but when a vacancy occurs, a governor can appoint a judge to fill out the remaining term, a move that all but guarantees the judge will prevail in the general election. And in Texas, Republican judges who’ve wanted to retire have often done so mid-term, allowing Perry to appoint their replacements.

Plaintiffs never did all that well in Texas courts compared with the big companies they were suing, but once Perry took office, the little guy’s odds got even worse. See this: 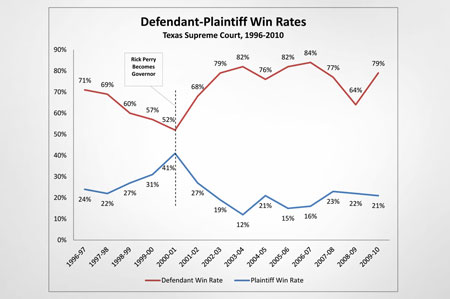 Texas WatchThe trend doesn’t help the case of those who suggest the solution to the influence of money in judicial elections is to have appointed judges. The data also don’t reflect the fact that since 2003, simply getting a plaintiff’s case into court in Texas has become far more difficult, especially in medical malpractice cases. Changes in state tort laws have kept thousands of consumers and injured patients out of court all together. According to the most recent data from the National Center on State Courts, in 2008 (the most recent year available), there were 10,000 fewer tort cases filed in Texas than in 1999. Those numbers fell even though the population of Texas jumped 20 percent over the past decade.

The decisions made by the Texas Supreme Court in individual consumer cases have wide reach. In one case highlighted by Texas Watch, the court essentially ruled that the state does not have the authority to pass laws creating stricter consumer protections than those that exist at the federal level—a remarkable opinion in a state that is openly hostile to the federal government’s rule of law.

Justices that Governor Perry has appointed to the bench, and who were subsequently elected, have relentlessly and recklessly pursued an activist ideological agenda focused on immunity for corporate and state wrongdoers, subverting the rule of law from within and effectively turning the granite walls of the court into a mausoleum for plaintiffs.