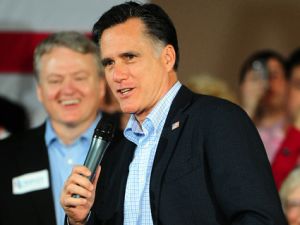 Former Massachusetts governor Mitt Romney has faced some tough questions about his taxes since telling reporters on Tuesday that he pays “close to 15 percent” of his income to the IRS—a lower rate than many Americans who don’t have the GOP front-runner’s fortune, which is estimated to be as high as a quarter-billion dollars. If the booing at Thursday night’s debate is any indication, Romney remains vulnerable on the tax issue, even among Republican primary voters.

“[Why shouldn’t] the people of South Carolina, before the election see last year’s return?” CNN’s John King asked the ex-governor.

“Because I want to make sure that I beat President Obama, and every time we release things, drip by drip, the Democrats come out with another array of attacks,” Romney responded. “If I’m the nominee, I’ll put these out at one time, so we’ll have one discussion of all of this.”

When King pointed out that Mitt’s father George Romney released twelve years of tax returns when running for president and asked Mitt if he would follow his father’s example, the candidate chuckled awkwardly before saying, “Maybe, I don’t know how many returns I’ll release.”

At that point, Romney had to pause for parts of the South Carolina audience to stop heckling and booing him. Then he recovered with what’s likely to be a common refrain in the general election if the ex-governor wins the nomination. “I’m not going to apologize for being successful,” Romney said, and the audience cheered.

The Obama administration offered a tax proposal last year that would have made the wealthy pay a larger share of their income. The proposal was dubbed “The Buffet Rule,” after wealthy investor Warren Buffett, who said that some of his employees pay lower tax rates than he does. At the time, Democrats salivated at the possiblity that Romney might also be paying a lower effective tax rate than people who don’t own more than one house, even as he’s proposing even larger tax cuts for the well-off. With most Americans still struggling financially, voters might not be as receptive to a super-wealthy politician asking them to bear a larger share of the tax burden so that he and other wealthy Americans can pay less.

There’s also the possibility that there’s some sort of major scandal lurking in Romney’s financial history that could sink his chances in the general election.

“If there’s anything in there thats going to help us lose the election, we should know before he wins the nomination,” Gingrich said. “If there’s nothing in there, why not release it?”