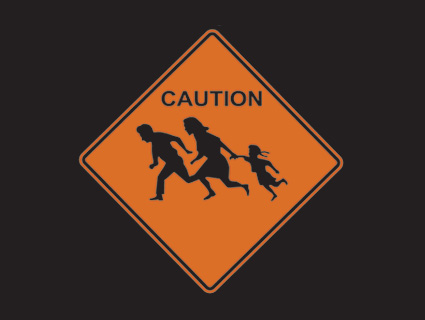 Mitt Romney unveiled a novel solution for illegal immigration during Tuesday night’s GOP debate, saying that he’d rely on “self-deportation” to reduce the number of unauthorized immigrants in the US.

Or at least it sounded novel. As my colleague Clara Jeffery notes, while “self-deportation” might sound like something you don’t want your parents to catch you doing, it’s actually an old euphemism for an immigration strategy of “attrition through enforcement.” What “self-deportation”—the favored approach to immigration of the GOP’s right-wing—actually means is making life so miserable for unauthorized immigrants that they “voluntarily” leave. Here’s Mark Krikorian of the Center for Immigration Studies (the anti-immigrant think tank that tried to mainstream the “terror baby” conspiracy theory) explaining the concept in 2005:

Among the other measures that would facilitate enforcement: hiring more U.S. Attorneys and judges in border areas, to allow for more prosecutions; passage of the CLEAR Act, which would enhance cooperation between federal immigration authorities and state and local police; and seizing the assets, however modest, of apprehended illegal aliens.

These and other enforcement measures would enable the government to detain more illegal aliens; additional measures would be needed to promote self-deportation. Unlike at the visa office or the border crossing, once aliens are inside the United States, there’s no physical site to exercise control, no choke point at which to examine whether someone should be admitted. The solution is to create “virtual choke points”—events that are necessary for life in a modern society but are infrequent enough not to bog down everyone’s daily business. Another analogy for this concept to firewalls in computer systems, that people could pass through only if their legal status is verified. The objective is not mainly to identify illegal aliens for arrest (though that will always be a possibility) but rather to make it as difficult as possible for illegal aliens to live a normal life here.

We can see how this concept has been applied in states like Arizona and Alabama, where local authorities have been empowered to act as enforcers of immigration law. Alabama takes the choke point theory even more seriously than Arizona—everything from enrolling in school to seeking health treatment has been turned into a so-called choke point. The moral, social, and economic consequences of the strategy are secondary to inflicting enough suffering on unauthorized immigrants in order to force them out of the country.

Kris Kobach, the Kansas Attorney General secretary of state who helped write both restrictive immigration laws and recently endorsed Romney, bragged about the impact of the Alabama law after it passed last year:

“There haven’t been mass arrests. There aren’t a bunch of court proceedings. People are simply removing themselves. It’s self-deportation at no cost to the taxpayer. I’d say that’s a win.”

Alabama’s immigration law has actually been such a disaster that the state is trying to figure out a way to repeal parts of the law. But make no mistake, when Romney is discussing “self-deportation,” he’s talking about creating a United States where parents are afraid to register their kids for school or get them immunized because they might be asked for proof of citizenship. He’s talking about the type of country where local police can demand your immigration status based on mere suspicion that you don’t belong around here. “Self-deportation” is just a cleaner, less cruel-sounding way of endorsing harsh, coercive government polices in order to make life for unauthorized immigrants so unbearable that they have no choice but to find some way to leave. The human cost of such an approach, let alone what it might do to American society, is viewed as a price worth paying.