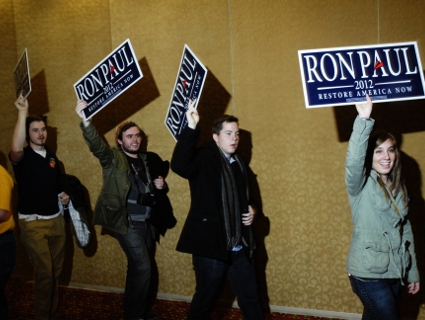 With a New Year’s Day poll showing Ron Paul in a three-way tie with Mitt Romney and Rick Santorum going into Tuesday’s Iowa caucuses, who will emerge victorious is anyone’s guess. If it’s Paul, the conventional wisdom goes, he will owe much of his success to a weak Republican field and an adoring flock of disillusioned youth, hundreds of whom have traveled from out of state to work behind the scenes. But there’s one other wild card: Paul’s crossover appeal to liberals attracted to his anti-war platform.

On Monday morning, Ron Paul, introduced by his son, Kentucky Sen. Rand Paul, spoke briefly at a downtown Des Moines hotel. Afterward, several Paul supporters told me that they supported the candidate for opposing the National Defense Authorization Act, recently signed into law by Obama, which codified the indefinite detention of terrorist suspects arrested in the United States. Joe Scarborough, host of MSNBC’s Morning Joe, was in town for the Paul event. Later, at his nearby hotel where the Democratic National Committee houses its caucus-prep “war room,” he watched occupy protesters echo many of the same complaints about the NDAA. “The only people in America who understand NDAA—I think it’s fascinating—are Occupy Wall Street and Ron Paul supporters,” Scarborough told me. “But you want to talk about the 99 percent—99 percent of Americans have no idea what this is all about.”

Francis Thicke, an organic farmer from Fairfield, Iowa, who ran for secretary of agriculture on the state’s Democratic ticket in 2010, announced that he would caucus for Paul on Tuesday “to keep his voice for peace and his voice to reduce the military in the debate, because he will challenge the other Republican candidates.” Thicke told me that although a Democratic county chairman responded by telling him that he was “stabbing them in the back” by supporting a Republican, he would vote for Obama over Paul without a doubt, because he doesn’t support dismantling the government. “This is a tactical thing” to expand voters’ awareness, Thicke said.

Thicke isn’t the only progressive aiming to use the GOP caucuses to make his own point: Some Occupy protesters have been pushing supporters to show up at the caucuses and vote “uncommitted” in hopes of sending a few of their own delegates for the national convention. But there’s disagreement in the Occupy ranks over this approach. Local radio show host Ed Fallon, a former state representative whose 2006 gubernatorial campaign I volunteered on, has been one of the most visible members of Occupy Des Moines, and on Monday he sent an email encouraging his fans to either attend the Democratic caucuses and cast an “uncommitted” protest vote there or to support “one of the less extreme candidates: Ron Paul, John Huntsman, Buddy Roemer or Fred Karger” on the Republican side.

Thicke told me that while he doesn’t know many other Democrats who plan to caucus for Paul, he thinks a turnout of unconventional voters could put the candidate over the top, pointing to polling that has excluded independents. But at Occupy Des Moines’ headquarters, things didn’t look so hopeful for the libertarian. After Monday’s protest against the DNC, an occupier tried to kick off a sympathetic mic check thanking Paul for opposing the NDAA. “We love you Ron Paul,” he shouted out. “Let’s hear it for Ron Paul!” He was met with a chorus of boos.