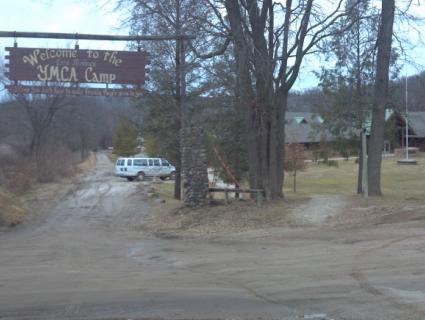 Outside the YMCA camp building in Iowa rented out by Ron Paul's campaign.Gavin Aronsen

At a rented YMCA camp lodge outside the town of Boone in central Iowa, young Ron Paul volunteers are preparing for Tuesday’s caucuses under a veil of secrecy. When I stopped by on Saturday, after driving down a winding gravel road surrounded by woods and farmland, the place appeared deserted, aside from a couple cars and a white van with a Ron Paul sign in the window. “At Y camp you don’t have to make friends, they’re given to you,” a sign greeted me near the the Pioneer Hybrid Outdoor Education Center where the volunteers work.

In Ron Paul’s case, those friends are  hundreds of out-of-state college students who paid their own way to travel to Iowa in support of their libertarian hero. On Wednesday, the New York Times reported that once they arrive at the camp, the volunteers are “under strict orders” to “look, dress, shave, sound and behave in a way that will not jeopardize Mr. Paul’s chances.” That means no boozing, no visible tattoos, and no scraggy beards (although I did spot a guy with earrings). Or as one volunteer from Ithaca, New York, told the Times, “What would Ron Paul do?”

The volunteers have also been told “not to speak to journalists or make postings on social media sites about their activities in Iowa,” the Times explained. That became immediately clear on Saturday, when I walked into a meeting room where about 20 volunteers prepared campaign flyers. “Are you with the media?” a young woman asked as someone turned off the music. I was ordered to leave the room, and after I was told that I could “absolutely not” take a flyer with me a woman shut the door to the lobby behind me. A young man watched me intently from behind a glass window as he called someone on his phone.

This paranoid atmosphere reflects the strict message discpline employed by the Paul campaign. That may be more important than ever now, since Paul has dropped to second place behind Romney in Iowa polls after facing a barrage of criticism over the racist newsletters published under his name in the ’80s and ’90s.

When the Times asked Jesse Benton, Ron Paul’s national campaign chairman, about the camp, he said, “We’re keeping our cards close to our vests.” But in an email, campaign spokesman Gary Howard gave me a seemingly less cryptic explanation: “We’re just making sure we keep things focused and limit distractions.”

Whatever the case may be, Paul’s youth operation in Boone is also reflective of the candidate’s enormous popularity among college-aged voters—the same demographic that helped Barack Obama win the Iowa caucuses, and ultimately the presidency, in 2008. Their turnout will be crucial on Tuesday for Paul to have a shot at winning this year’s Republican caucuses.