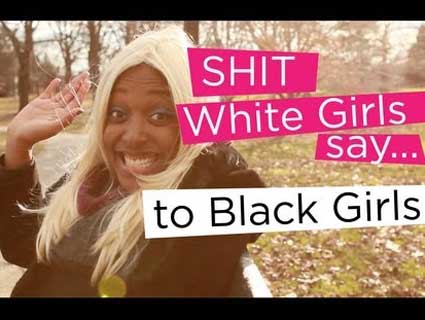 By now you’ve likely seen “Shit Girls Say“, the viral YouTube series starring Graydon Sheppard in drag as a high-maintenance 20-something woman who eats a lot of chips and struggles to use her computer. It’s spawned the most hilarious and distracting internet meme in recent memory (i.e. five minutes in Internet time), from the obscure “Shit Raw Vegans Say” to the unintelligible “Shit Wookies Say“. Turns out everyone’s a stereotype and (big surprise!) stereotypes can be hilarious.

Frankly, we’re not big fans of the original “Shit Girls Say.” It’s a good impression of a certain type of girlish performance, but, as Naima Ramos-Chapman points out in HuffPo, “the absurdity of watching men in drag speaking a nonsensical ‘girlish’ language that irks, who else, but the men who have to put up with it” isn’t actually that funny. Another dud is “Shit Asian Girls Say“, which portrays Asian women as generically annoying and materialistic, without the knowing affection and insider digs of the best caricatures. Meanwhile, we’re still waiting for a linkworthy “Shit Guys Say”, because, seriously, guys can say some shit.

Still, you can lose an afternoon watching copy-cat videos of “Shit [insert race, gender, or sexual orientation] Say”. Here are our favorites.

By far the most razor-sharp video with the funniest performance. In an essay at Huffpo about the video, comedian Franchesca Ramsey says she drew on her experiences feeling like a “token black girl” at work and among friends to skewer “white people faux pas.” And now, white girls everywhere are cringing and asking themselves, “Have I said that?”

You don’t have to be subcontinental to appreciate this acid-tongued portrayal of harried, world-fearing desi mothers, but it helps. Update: the male counterpart gets its own treatment!

Best moment: When the amma lying in bed under the covers punches in the wrong number on her cordless phone.

According to this video, cis people—folks who identify as the gender they were assigned at birth—love playing guessing games about trans people.

Ladies, if you’ve ever openly pined for a gay boyfriend, the way one might pine for a new handbag, prepare to check yourself.

Best Moment: The desire to hook up your gay friend with any known (or suspected) gays in the area, including the 53-year-old stylist from your hair salon.

As comedians Robin Thede and Inda Craig-Galván demonstrate, sometimes it’s not what you say, but how you say it . . . and how far you hold your cell phone from your face when you say it.

Best Moment: “I want a new dress, but I don’t wanna go to Rainbow.” Cut to shopping trip at Rainbow.

Focused on our shared values, rather than our differences, this video claims that nobody misses fax machines, modems, Rosie O’Donnell, or dialup. (Though we beg to differ on one point: seems half of SF is relocating to Oakland these days! East Bay love, y’all.)

Best Moment: When all worldly stress and anxiety melts away at the news that someone’s getting married.

We suspect the producers combed our own comments section to find these examples. Would have liked to see some Ron Paul supporters try and explain away his newsletters, though.