When people talk about South Carolina Republican politics, they talk, with a good deal of proof, about “whisper campaigns.” It’s sort of a caricature at this point, and as some voters I’ve spoken with have put it, probably as much a product of the primary’s timing as it is the state’s character; by the time the third nominating contest has rolled around, there’s a sense of urgency that leads to, well, desperate measures.

Right on cue, this is the flier that was left on my windshield at last night’s Personhood USA pro-life forum in the Evangelical hub of Greenville. Its target? Rick Santorum’s wife, Karen: 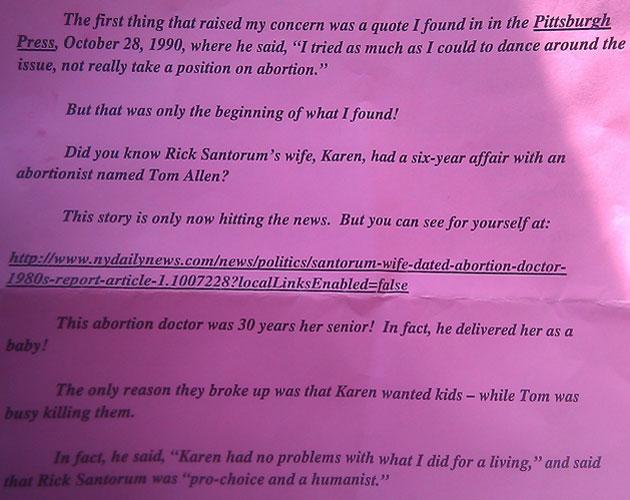 Did you know Rick Santorum’s wife, Karen, had a six-year affair with an abortionist named Tom Allen?

This story is only now hitting the news. But you can see for yourself at:

This abortion doctor was 30 years her senior! In fact, he delivered her as a baby!

The only reason they broke up was that Karen wanted kids—while Tom was busy killing them.

In fact, he said, “Karen had no problem with what I did for a living,” and said that Rick Santorum was “pro-choice and a humanist.”

The rest of the letter focuses on the former Pennsylvania senator, concluding “He just wants to be President so badly, he’ll say anything to be elected.”

The susbstance of the Karen Santorum smear is, for the most part, true. It wasn’t an affair, though—neither Karen nor Tom Allen were married at the time—so the hint of infidelity is false. More to the point, it’s difficult to see any scenario in which this should be relevant. Does anyone seriously doubt the Santorums’ anti-abortion credentials?