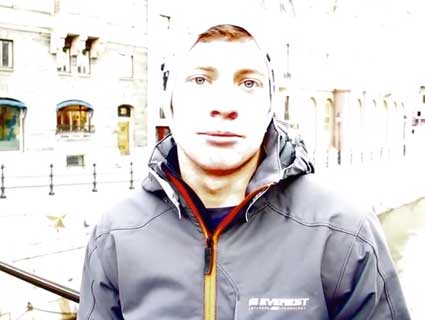 Love Georg Elfvelin from an AllOut.org video at a protest against Sweden's law mandating trans people be sterilized

Little known fact about Sweden, that supposed bastion of liberal idealism: If a Swedish transgender person wants to legally update their gender on official ID papers, a 1972 law requires them to get both divorced and sterilized first.

Sweden is considered extremely gay-friendly, with one of the highest rates of popular support for same-sex marriage, and more than half the population supports gay adoption. Arguing that the current law is both unpopular and abusive, the country’s moderate and liberal parties want to see it repealed. In response, the small but powerful Christian Democrat party formed a coalition with other right-of-center parties to join in upholding the requirement for sterilization. End result: a proposal for new legislation that allows trans—a preferred term for many people who undergo gender reassignment—to be married but continues to force them to be sterilized.

Sweden’s relationship with forced sterilization goes way back. In 1997 journalist Maciej Zaremba, a reporter for Dagens Nyheter, discovered that over 60,000 people between 1935 and 1976 were sterilized against their will, including “‘mixed race individuals,’ single mothers with many children, deviants, Gypsies, and other ‘vagabonds.'”

Then, like now, marginalized groups were obligated to sacrifice their reproductive freedom to gain basic rights. According to an article in the Columbia Journalism Review about Zaremba’s investigation:

The person concerned was either declared “of unsound mind”—a simple procedure—or was subjected to irresistible pressure. Sign this or we’ll take the children, sign this or there’ll be no social benefit, no flat, no leave…and so on. Sweden went furthest in the way of legalized blackmail.

As the Los Angeles Times reported in 1999, Sweden’s effort to “perfect its genetic stock” ultimately cost the government $22,000 in compensation for each of the approximately 200 citizens—mostly female—who claimed they were forcibly sterilized between 1935 and 1975.

The legislation currently under debate in Sweden is despicable, but Sweden isn’t alone in this practice. Many countries have at points forced sterilization on individuals deemed “undesirable,” and the United States is no exception.

On January 10, a North Carolina state task force approved a one-time payment of $50,000 for survivors of a little-known state-run eugenics program that sterilized an estimated 7,600 residents between 1929 and 1974. A CNN report estimated that 1,500 living victims may still remain, and while at least seven other states ran similar eugenics programs at different points, North Carolina is the first to compensate its victims. Little in known about how the state targeted individuals for sterilization and the logistics involved, but while eugenics programs in other states tended to focus on criminals and the mentally ill, many poor and uneducated women and children were sterilized in North Carolina.

While the United States doesn’t force sterilization for trans people, most states require a surgeon’s letter verifying proof of “surgical treatment” in order to legally change gender on identification. The ACLU has found that the definition of “surgical treatment” is vague. Those who don’t or can’t obtain a costly procedure or at least a surgeon’s letter are often left unable to legally change their gender, which can create serious personal and professional complications.

The Riksdag, Sweden’s national assembly, will review the proposal for new legislation in the spring, and barring further developments, the law will retain its requirement for compulsory sterilization. Love Georg Elfvelin, a 21-year-old store manager in Sweden, made an emotional video for AllOut.org during a protest in front of the Swedish Parliament that sums up the stakes in Sweden and around the world: “I can either be represented correctly, or have my basic human rights violated.”

The headline and first sentence of this piece were corrected to conform with Mother Jones style.