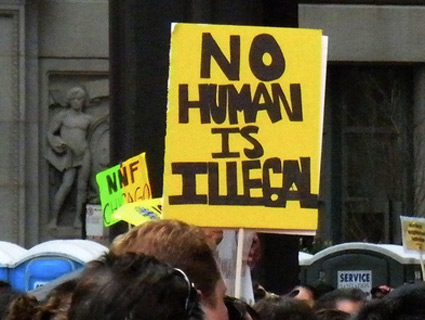 “Whenever the word ‘Republican’ is used, it was almost like an automatic wall that falls,” George Rodriguez, president of the San Antonio Tea Party, said at a conference organized by the conservative Texas Public Policy Foundation. “Yet when we used the word ‘conservative,’ people were more responsive.”

Warned off by fiery Republican rhetoric lashing out at illegal immigrants in the last electoral cycle, U.S. Hispanics voted by a two-to-one margin for President Barack Obama over Republican rival John McCain in 2008. And in the 2010 Texas gubernatorial race, 61 percent of Latino voters chose Bill White, the Democrat, over Republican Governor Rick Perry, according to the Pew Hispanic Center.

To reverse that allegiance, Rodriguez said that conservative Texans have to overcome established voting patterns. “For some reason, these folks continue to vote liberal, only because their parents did,” he said. “When you ask them, ‘Why do you vote like that?’, they don’t know, they don’t know, they just do it.”

Frank Luntz would be proud. But at the risk of pointing out the obvious, it’s not that hard to figure out why “they just do it”: The right has a miserable track record on hot-button immigration issues. In early November, President Obama suggested that the GOP presidential candidates were  essentially doing his campaigning for him:

I don’t think [the situation] requires us to go negative in the sense of us running a bunch of ads that are false, or character assassinations. It will be based on facts…We may just run clips of the Republican debates verbatim. We won’t even comment on them, we’ll just run those in a loop on Univision and Telemundo, and people can make up their own minds.

To be fair, conservatives’ attempts to redirect this portion of the Democratic base aren’t entirely futile (Newt Gingrich has been big on this). On issues like abortion and marriage equality, polls show the majority of Latino respondents coming down on the side of social conservatism. Who knows: If Republicans manage to dampen their immigration fire-breathing, a future realignment might not be out of the picture. But that day isn’t anywhere close to dawning, and that would be true even if Latino tea partiers renamed the GOP the “Super-Friendly and Totally Awesome To Spanish-Speakers and Their Religious Traditions, Jobs, and Kids” Party.