Congressman Ron Paul’s third-place finish in Tuesday’s Iowa Republican Caucus was a remarkably strong showing for a candidate who has so little in common with mainstream Republicans. Perhaps the nation’s most politically unique congressman, Paul shares policy stances with conservatives, liberals, and libertarians, while differing markedly from all of them. 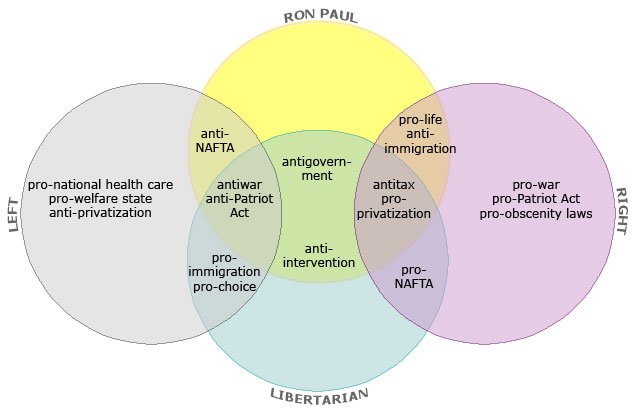 So where does Paul fit in the Libertarian universe?

Libertarianism might be a simple ideology, an aversion to big government in all its forms, but don’t tell that to libertarians: “Like any movement of any size,” says Nick Gillespie, editor of the libertarian magazine Reason, “it is an endless operation of trying to figure out more and more ways in which people who agree on 99.9 percent of everything can really hate each other’s guts.”

Anarcho-Capitalists: The most radical of the lot, they want to abolish government entirely (though, unlike regular anarchists, they do support private property rights). “The state acts like a band of thieves and killers,” explains Lew Rockwell, the best-known exponent of this strain. “The private sector doesn’t do that.”

Minarchists: Archrivals to the anarcho-capitalists, they support a minimalist version of government: Let the state handle roads, policing, and defense—but nothing more. Many, including Ron Paul, view the Constitution as the ultimate minarchist document.

Cosmopolitan Libertarians: Term used by the minarchist editors of Reason to describe their embrace of world citizenship and deride rivals as hayseeds

Religious Libertarians: Worship deities of their choosing, care about politics primarily as it affects religious freedom. In 17th-century England they were Puritan Roundheads. In 21st-century America they’re Mormons.

Gold Bugs: Advocate a return to the gold standard, or some equivalent, as a way to diminish the fiscal powers of the state; dismiss foes as “inflationists”

Objectivists: Followers of philosopher Ayn Rand who love morality tales, hate anarchy, and endorse a scorched-earth foreign policy. If “flattening Fallujah to end the Iraqi insurgency will save American lives,” Ayn Rand Institute director Yaron Brook has written, “to refrain from [doing so] is morally evil.”

Paleolibertarians: Old-schoolers who despise the neolibertarians for selling out to the system. Also think atheism is overrated.

South Park Conservatives: Find their politics articulated in a show created by two avowed libertarians; a seminal episode follows a race for school mascot between a giant douche and a turd sandwich. Which, says Reason‘s Gillespie, “pretty much sums up how most libertarians approach politics.”

Paultards: Blogosphere dis for those who annoy the online masses by relentlessly shilling for their man in comment threads, polls, and social networking sites
—J.H.

Rand of the Free

Around 9 percent of Americans are libertarians. What makes them tick?

59% say they are satisfied financially.

36% say they don’t know where Obama was born.

60% say we shouldn’t give up privacy to be safer from terrorism.

71% say homosexuality should be accepted,

Yet only
43% support gay marriage.