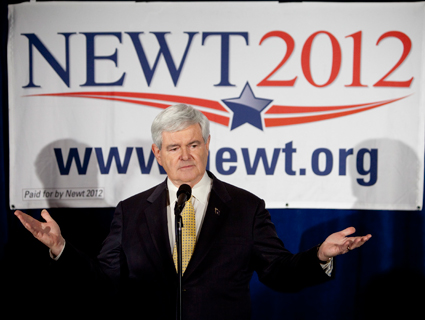 As a service to our readers, every day we are delivering a classic moment from the political life of Newt Gingrich—until he either clinches the nomination or bows out. And today, in honor of Tuesday’s New Hampshire primary, you get a bonus Daily Newt!

For the last week, Rep. Ron Paul (R-Texas) has been hammering Gingrich for his record during the Vietnam war, when the former speaker, then a graduate student at Tulane, avoided service through a series of deferments. Gingrich, Paul asserted, was a “Chicken-hawk“—someone too cowardly to go to war himself but more than willing to send others into battle. At Saturday’s debate in Manchester, New Hampshire, Paul doubled down: “I’m trying to stop the wars, but at least, you know, I went when they called me up.”

If there’s ambiguity about Gingrich’s record, it’s because of his own statements. On Saturday, Gingrich claimed that he wasn’t eligible for the draft: “The fact is, I never asked for deferment,” he said, in a visibly irate response to Paul. “I was married with a child. It was never a question. My father was, in fact, serving in Vietnam in the Mekong Delta at the time he’s referring to. I think I have a pretty good idea of what it’s like as a family to worry about your father getting killed. And I personally resent the kind of comments and aspersions he routinely makes without accurate information and then just slurs people with.”

Gingrich may not have asked for deferments, but he got them: Peter Boyer reported in Vanity Fair in 1989 that Gingrich had received student and marital deferments that allowed him to avoid service. And Gingrich’s stepfather, Bob Gingrich, told Gail Sheehy six years later that Newt likely would have received a medical deferment if it came to that: “Without corrective lenses, he couldn’t see across the room. Flattest feet I’ve ever seen. He’s physically incapable of doing military service.” Gingrich himself told David Frost that he had joined the Air Force ROTC as a freshman at Emory, but left at the end of the year.

Ultimately, though, it wasn’t an issue of eligibility—Gingrich could have tried to enlist, draft or no—but of will. “Given everything I believe in, a large part of me thinks I should have gone over,” Gingrich told Jane Mayer in 1985. “Part of the question I had to ask myself was what difference I would have made,” adding that “there was a bigger battle in Congress than Vietnam.“ As Gingrich put it, “no one felt this was the battle-line on which freedom would live or die.”

Avoiding the draft, Gingrich told Mayer, was “one of those things that will hang over me for the rest of my life.” A few months later, he told the Washington Post, “Frankly I would not have made any difference in Vietnam but much more is what difference it would have made in me.” Besides, he showed his mettle in other ways:

“Temporarily in the short run,” Gingrich admits that Vietnam combat veterans in Congress have “the credential of personal courage.” But he counters “What do you think it took to stand up on the House floor as a freshman to take on (the expulsion of) Rep. Charles Diggs?”

Real courage, apparently. It was that line of argument that drew Paul’s ire at Saturday’s debate: “I don’t like it when we send our kids off to fight these wars, and when those individuals didn’t go themselves, and then come up and when they’re asked, they say, ‘Oh, I don’t think I could—one person couldn’t have made a difference.'” Take a look:

There’s one thing missing from Gingrich’s alibi which might explain his inconsistencies: Despite his repeated written and spoken endorsements of the Vietnam war, several people who knew him at the time say he actually opposed it. Frank Gregorski, a Gingrich confidante since their days at West Georgia College, told PBS Gingrich “didn’t want to be one of the sacrifices, one of the enlisted men that were sent to die for a stupid military leadership or a political leadership.” Gingrich’s adviser at Tulane, Pierre-Henri Laurent, told the New Yorker that the student he knew in New Orleans was “modestly anti-war.” In a 1976 fundraising speech, Gingrich struck a tone that would feel at home in a Ron Paul stump speech: “The US cannot be the policeman of the world. When we tried that in Vietnam, they beat us up.”

In The Pact, a sort of dual biography of Clinton and Gingrich, journalist Steven Gillon disputed the characterization that the speaker opposed Vietnam on principle. Instead, Gillon argued, Gingrich was just disillusioned with the way it had been handled by the Johnson administration. Lee Howell, Gingrich’s former press secretary during his first run for Congress, perhaps put it best, in an interview taped by MoJo‘s David Osborne in 1984 but ultimately never published:

Publicly he supported the war, supported Nixon, the whole bit. Privately, Newt has a tendency to say things in such a way that whomever is listening thinks he is agreeing with him. So there are lots of people who think that he was opposed to the war. It wasn’t so much that he was opposed that he just thought it was stupid—that it was the wrong war at the wrong time from a historical perspective.

Whatever the case, there’s compelling evidence that at the time he was considering whether or not to serve, Gingrich was less than bullish on the war. That’s the truth about his Vietnam record he can’t say publicly, and ultimately, what makes Paul’s attacks stick.