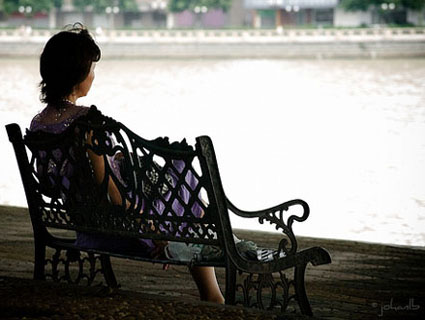 An informal survey of other anti-Valentine playlists suggests that the genre is usually interpreted as anti-love. But tales of broken hearts, unrequited desire, and lonely nights are all still very much about love. In the words of Gloria E. Anzaldúa: “All reaction is limited by, and dependent on, what it is reacting against.” And that couldn’t be truer of love and its absence. Songs about love and anti-love are pretty much the same.

But, of course, Valentine’s Day isn’t about love—just an over-commercialized holiday celebrating one particular brand of committed, romantic love. Above all, it represents that ubiquitous cultural pressure—driven home by nearly every rom-com and pop song—to find fullfilment within a relationship. As my friend Samhita Mukhopadhyay writes on the Occupy Valentine’s Day Tumblr, V-Day “often serves to remind us of the inadequacy of our relationships or the ‘tragedy’ of being single.”

Are you an amorous hipster? Check out last year’s Valentine’s Day playlist. It’s just for you!

So this playlist is for everyone who’s single and doing A-okay—the survivors, the ramblers, and the players. It’s for those who aren’t ready to settle down yet, and those who never will be. It’s for anyone single and happy—whether for a brief interlude between heartbreaks, or forever. These songs tell stories that are drowned out in the saccharine cacophony of Valentine’s Day—stories of breakups that come as a relief, the cost of committment, the pull of independence, and the power that comes with dancing on your own.

“I Will Survive” by Cake: The road back to that happy, single place after a tough breakup can be dark and long—but also make you stronger. Gloria Gaynor’s classic “I Will Survive” has been covered a bazillion times, but I’m partial to Cake’s 1996 rendition. Best line: I’ve got all my life to live/I’ve got all my love to give/and I’ll survive.

“Different Drum” by Linda Ronstadt: Written in 1965 by Mike Nesmith, “Different Drum” took off when it was recorded two years later by Linda Ronstadt and the Stone Poneys. Ronstadt flipped the gender references in the original version to tell the story of a woman who just isn’t looking to settle down. Best line: All I’m saying is I’m not ready for any person, place or thing/to try and pull the reins in on me.

“I’m Free” by the Rolling Stones: Hot Chip also does a great remix of the Stones’ cheerful 1965 ode to free love. Best line: I’m free to choose who I please any old time/I’m free to please who I choose any old time.

“Marriage Is for Old Folks” by Nina Simone: The High Priestess of Soul says marriage just ain’t for her in this playful 1965 ditty, and probably insulted a bunch of married couples. Best line: One husband, one wife/Whaddya got?/Two people sentenced for life!

“I’m Ridin’ Solo” by Jason Derülo: In this single off his 2010 debut, Jason Derülo tells a positively joyful tale about getting back out there after a breakup. Best line: Now I made it through the weather/better days are gonna get better.

“Girls Just Want to Have Fun” by Cyndi Lauper: The exuberance of Cyndi Lauper’s classic is hard to beat. While the cover by Starfucker is pretty stellar too, who could pass up a chance to watch this epic romp through the Lower East Side in the ’80s? Best line: Some boys take a beautiful girl/and hide her away from the rest of the world/I want to be the one to walk in the sun.

“The Wanderer” by Dion: Dion, who originally recorded “The Wanderer” in 1961, later said that it’s actually a sad song: “It sounds like a lot of fun but it’s about going nowhere.” Maybe, but it really does sound soooo fun. Best line: I roam from town to town/I go through life without a care/and I’m as happy as a clown.

“None of Your Business” by Salt-n-Pepa: The pioneering hip-hop trio’s defiant smackdown of sexual double standards is especially good for the ladies but really works for anyone who’s been judged for bucking the norm. Best line: There’s only one true judge, and that’s God/So chill, and let my Father do His job.

“Babe I’m Gonna Leave You” by Led Zeppelin: Written by folk artist Anne Bredon and recorded by Joan Baez in 1962, this song speaks to that yearning for freedom that itches even in the best of relationships. Inspired by Baez’s version, Led Zep put together its own take in 1969. Best line: You made me happy every single day/But now I’ve got to go away, oh, oh, oh.

“Since U Been Gone” by Kelly Clarkson: This song was originally written for Pink, who has the triumphant post-breakup thing down herself. But it was Kelly Clarkson who made it an instant hit in 2004. Best line: But since you’ve been gone/I can breathe for the first time/I’m so moving on/Thanks to you now I get what I want.

“Better Off Without a Wife” by Tom Waits: Tom Waits’ easygoing, kinda sexist 1975 anthem is dedicated “to the bachelors and the Bowery bums.” Best line: Yeah, you see I’m kinda selfish about my privacy/Now as long as I can be with me/we get along so well, I can’t even believe it.

“One Night Stand” by the Pipettes: Rocking their signature polka-dot dresses, British indie popsters the Pipettes offer this brutally honest brush-off to a guy who seems to be getting too attached. Hey, she did warn him. Best line: Leave me alone/you’re just a one-night stand.

“One Is The Magic #” by Jill Scott: Poet, singer, actress Jill Scott elegantly turns a sorta sad premise—”there’s just me”—into something uplifting. Best line: So many times I define my pride through somebody else’s eyes/Then I looked inside and found my own stride/I found the lasting love for me.