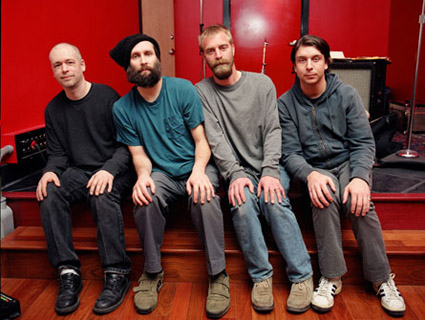 Martsch is the one with the hat.photo by Autumn DeWilde

Doug Martsch doesn’t like to make much of his band, a “little-known” outfit called Built to Spill that since the early 1990s has spawned an entire subgenre of idyllic-yet-grungy indie rock (think no-longer-just-a-college-band bigwigs Modest Mouse). Since 1994’s There’s Nothing Wrong With Love (ranked #24 on Pitchfork’s “Top 100 Albums of the 1990s”) the band’s unique mix of intricate guitar solos, stringy vocals, and starkly simple but hard-hitting lyrics have earned them a devoted, though never very huge, following. This week, they are headed down the Pacific coast from Boise for a small tour before getting started on recording a new album, the band’s first since 2009’s There is No Enemy. Last week, Martsch, Built to Spill’s famously reticent front man, regaled me with his thoughts on festival crowds, interview hazards, and the unexpected rewards of judging a record by its cover. (For the initiated, I tossed in clips of a few BTS favorites.)

Mother Jones: Any idea what the new album is going to sound like?

MJ: Giant music festivals have really proliferated over the past decade. What’s it like for you playing to these massive party crowds as opposed to just dedicated fans?

DM: I think it’s pretty nice actually. We’re lucky because we do play a lot of shows where people are into it and know our music and stuff. It’s kind of interesting and fun to play for people who are just sorta walking by, going to get something to eat, and sort of checking you out for a minute and having no idea what you’re all about.

MJ: Built to Spill is known for keeping a pretty low profile. During shows, there are no theatrics, and maybe just a few unassuming thank you’s between songs. Do you have an aversion to showmanship?

DM: Oh, I think that’s maybe because when I was growing up, I really liked punk rock. I liked the sort of people that played really powerful music that was pretty unassuming otherwise—people who didn’t dress weird or do much theatrics. But I definitely have an appreciation for that stuff, and I guess I could’ve just as easily been more influenced by something else and gone in a totally different direction. I think when I was younger I would’ve tried to do more weird shit, but it’s too much effort for me right now to be that creative.

MJ: In a 1997 interview, you called electronic music “a complete fabrication by the music industry.” Do you still feel that way?

DM: I think that my quote is really stupid, because I don’t think that at all, I don’t know why I said that. That’s one of those hazards of an interview: You get tired of your stock answer and you try to get creative and even play devil’s advocate. I don’t really care, though. If people like electronic music, then great—let that be the next thing. I don’t think I ever really will, but there’s plenty of records for me to go buy.

MJ: You’ve also mentioned that you like to jam, which begs the question: How do you feel about jam bands?

DM:  Yeah, hmm, I don’t really get them much. I like simpler things, more visceral kinds of music.

MJ: A couple of years ago you were on a pretty big blues kick, and even did a solo blues album. Are you still into it?

DM: I kind of made that record and stopped playing that stuff. I have a radio show, but I usually play a lot of things that I liked when I was younger or when I was in high school, when I listened to a lot of soul and reggae music. And then here and there people turn me on to some classic rock or punk rock that I just missed when I was younger. But I don’t listen to a ton of music other than putting my show together, just because my lifestyle isn’t too conducive to listening to music all the time. I like to watch basketball, and I would rather not listen to music while I’m doing that.

MJ: You’ve cited Dinosaur Jr.’s J Mascis as a huge influence on your music. Do you remember where you were when you first heard them?

DM: Ha-ha, yeah! Someone loaned me You’re Living All Over Me. It was right after I graduated from high school. To be honest, I didn’t really like it all that much at first, but I’d just gotten a record player—I’d listened to cassettes for years—so I had like 10 records total. That was back in the days too when I had a lot of music that wasn’t that good but I had to listen to it because I’d spent my allowance on it. I couldn’t really get access to tons of stuff, so I kind of had to take a chance judging by the record cover or name. So I was way more disciplined and if I didn’t like something I’d still listen to it a bunch of times. That record was like that. But then I learned those were the most rewarding records, the ones that took a few listens to get into.