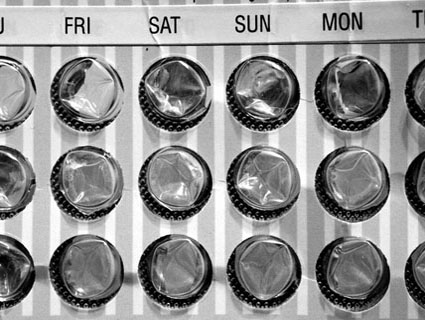 To hear some conservative politicians tell it, you’d think birth control pills fall from the sky and IUDs grow on trees. During the recent controversy over President Barack Obama’s rule requiring insurance companies to offer birth control free of charge, GOP presidential hopeful Rick Santorum claimed birth control “costs just a few dollars.” Rep. Tom Price (R-Ga.) went even further, arguing that “not one woman” has ever been denied access to contraception because she could not afford it.

As the huge majority of American women who’ve used it know, birth control costs a lot more than a couple bucks. The typical American woman spends about 30 years trying to prevent pregnancy, so even relatively small monthly copays add up. Enter in your age and your preferred birth control method below, and our handy contraceptive calculator will tell you just how much you’d be dishing out for pills, patches, and rings over the rest of your fertile years without Obama’s free birth control plan:

How much will you spend on birth control from now until menopause?

Over the rest of your child-bearing years, you can expect to pay:

See all assumptions and sources

What if you switched methods?

Note: Assumes a 3 percent annual inflation rate and menopause (i.e. the end of birth control usage and spending) at age 51, the age at which 50% of American women reach natural menopause according to a study published in the American Journal of Epidemiology. Note that the calculator does not account for years spent pregnant or trying to conceive. Source: Birth control costs from a Center for American Progress survey of health providers, pharmacies, academic articles, and publicly available reports from consumers, advocates, and nonprofits. The range of prices are based on average cost for contraceptives with insurance and the typical retail price without insurance. CAP notes that oral contraceptives fluctuated significantly in retail price without insurance, and in some cases the out-of-pocket retail cost may be higher than reflected in this data.

According to the Center for American Progress, even women with private health insurance often shoulder a significant portion of the cost for their prescription birth control needs. That's one of the reasons women of reproductive age spend 68 percent more on out-of-pocket health care expenses than their male counterparts do. And contrary to Rep. Price's claim, surveys show that women do indeed forgo contraception—or use it inconsistently—when they're in a financial crunch. According to a 2009 study from the Guttmacher Institute (PDF), 23 percent of middle- and low-income women said they had a harder time paying for birth control in the current economy and 24 percent put off a visit to the gynecologist in order to save money. A recent Hart Research Associates survey found that one in three women voters—including 55 percent of young women—have struggled to afford birth control. In fact, the high cost of birth control is exactly why the Institute of Medicine recommended that it be covered without a copay.

Birth control isn't just about pregnancy prevention—many women use it for other medical reasons too. A recent study found that only 42 percent of women using the pill in the United States are using it solely to prevent pregnancy.

Please note that birth control costs can vary considerably depending on your insurance coverage, health care provider, and location. Our calculator is based on data from the Center for American Progress, which provided a range of prices for each contraceptive method. CAP's price estimates were based on info from Planned Parenthood and confirmed by surveys of other health care providers and pharmacies, academic studies, and consumer and advocate reports.