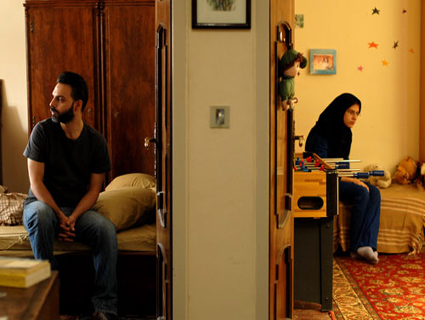 When Oscar nominations were released last week, it was no surprise that the Iranian film A Separation, written and directed by Asghar Farhadi, was among the list of Foreign Language Films—after all, it had already won the Golden Globe in that category in addition to being a big hit on the festival circuit. But with a second nomination, for Original Screenplay, the film has a shot at upsetting movies backed by Hollywood powerhouses.

Farhadi, who started out writing screenplays for the Islamic Republic of Iran Broadcasting and directing TV shows, has slowly gained a Western audience with films like Fireworks Wednesday, which won a Golden Hugo at the Chicago International Film Festival in 2006, and About Elly, which won prizes at festivals in Berlin and Tribeca in 2009. With the success of A Separation, Farhadi is poised to break into a more mainstream audience, and in so doing, to bring a subtle, nuanced portrait of daily life in Iran to the American public at a time when relations between the two countries are particularly tense.

The film begins as Simin (Leila Hatami) is asking a judge to grant her a divorce from her husband, Nader (Peyman Moadi), not because he’s a bad partner—she calls him a “good and decent person”—but because he refuses to leave Iran with her, claiming that he instead needs to take care of his elderly father. Frustrated by the official’s refusal to grant her request, Simin leaves the apartment where she and Nader live with their daughter, Termeh (Sarina Farhadi, the director’s daughter) to stay at her parents’ house, leaving Nader to find a substitute caretaker for his father, who has Alzheimer’s and can’t be left alone. So he hires Razieh (Sareh Bayat), a devout woman with a young daughter, Samoyeh (Kimia Hossenei), and another child on the way—though it’s hard to tell beneath her flowing chador. After Nader’s father soils his pants on the first day, Razieh wants to quit. “The work is too heavy,” she says; it’s also underpaid and far from her home in the suburbs. But her husband, Hodjat (Shahab Hosseini), is unemployed and in debt to multiple creditors, so she continues on—but in secret, as Hodjat has a hot temper and would be angry to learn she’s working for a single man.

Shortly thereafter, Nader comes home early to find his father face-down on the floor, his hand tied to a bedpost, and no one else home. When Razieh returns to the house shortly thereafter, saying only that she had to go out, Nader’s fear and frustration erupt, and a confrontation between the two ends with Nader pushing Razieh out the door. That action sets off a chain of accusations, defenses, and contentions that loop around and circle back over a constantly shifting moral terrain.

While much of the plot revolves around an act of physical violence and its consequences, the real subject of the film is subtler forms of violence, those inflicted by institutions as well as individuals. Some are related to gender and religion, but many other aspects of Iranian society are also implicated, from Hodjat’s depression stemming from chronic unemployment to the workings of the Iranian legal system, which, though resolutely impartial, is also consistently brutal, doling out cruelties small and large to those who come within its grasp. For the middle-class Westerners who are likely to make up the bulk of the film’s international audience, Nader and Simin are the obvious stand-ins, with their jeans and Ray-Bans and secular lifestyles. But the comparison isn’t always flattering: The casual prejudice and self-centeredness their actions reveal can be jarring, and viewers’ sympathies are likely to be buffeted back and forth with each new revelation.

Though the title of the film ostensibly refers to the faltering relationship between Nader and Simin and the marital split that sets the plot in motion, there are rifts aplenty—between classes, genders, generations. Tensions are revealed in small scenes and details: An early negotiation over wages exposes the precariousness of domestic work. Nader fumbles around the unfamiliar territory of the kitchen after his wife leaves, not knowing even where tea is kept. In an early scene, Razieh calls a religious hotline of sorts to inquire whether changing the old man’s urine-soaked pants is a sin; later, at the courthouse, she stands in a long line of women waiting to use the payphone, but is interrupted before we can hear what she wants to ask.

Though the spousal relationships in the film are complex and often moving, in the end, it’s the relationships between parents and children, most of them colored by loss, that I found most riveting: Nader’s tenderness towards his fading father and anguish at his decline; Simin’s brusqueness towards the daughter she can’t bear to leave behind; Razieh’s terror at the prospect of losing both her children; Nader’s slight smile as he watches Termeh gain her footing in an uncertain adult world