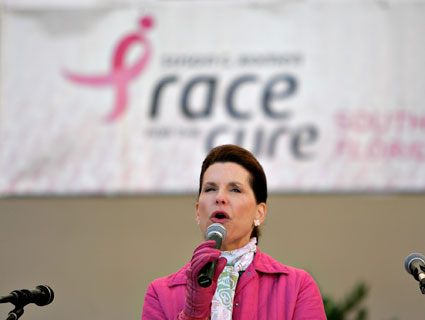 Tuesday’s news that Susan G. Komen for the Cure is ending funding it provided to Planned Parenthood for breast cancer screenings has led to increased scrutiny of Komen’s staff, which—as I reported previously—includes a federal lobbyist who pledged to defund Planned Parenthood while campaigning for governor of Georgia.

Komen’s founder is pretty conservative, too. Komen CEO Nancy G. Brinker, who founded the foundation in memory of a sister who died from breast cancer, was the chief protocol officer for the United States from 2007 to 2009 under the George W. Bush administration, and before that served as his ambassador to Hungary.

Brinker is also a major Republican donor, and has given more than $175,000 to Republican candidates and the Republican National Committee since 1990, according to donor data compiled by the Center for Responsive Politics. Her late husband, Norman Brinker, was the chairman of Brinker International Restaurants, which owns the chains Chili’s, Maggiano’s, and Macaroni Grill. Norman Brinker gave more than $440,000 to Republicans between 1990 and his death in 2009.

Second, sitting on Komen’s Advocacy Alliance Board is Jane Abraham, the General Chairman of the virulently anti-choice and anti-science Susan B. Anthony List and of its Political Action Committee. Among other involvements, Abraham helps direct the Nuturing Network (sic), a global network of crisis pregnancy centers known for spreading ideology, misinformation and lies to women facing unintended pregnancy. Also on the board of Nuturing Network (sic) is Maureen Scalia, the wife of Supreme Court Justice Antonin Scalia.

This is all to say that perhaps the Planned Parenthood decision isn’t all that big of a surprise, given the politics of people involved with Komen. The flap might end up benefiting Planned Parenthood in the end, however. The group has raised more than $400,000 since the news broke, a spokesman said Wednesday afternoon.