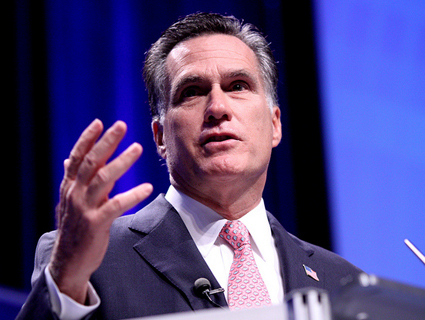 In 2010, Mitt Romney and his wife gave just under $3 million to charity, or about 15 percent of their $21.6 million income. That’s a sizeable sum even by 1 percenter standards, which is why Romney’s backers say it’s unfair to castigate him for exploiting tax loopholes. “Mr. Romney’s taxes reveal the most generous charitable donor to run for president in recent memory,” writes National Review‘s Mona Charen.

But generous towards whom? Just over half of Romney’s 2010 giving went to the Church of Jesus Christ of Latter-Day Saints. The Romneys didn’t have much choice there: The church requires Mormons to tithe 10 percent of their income to remain members in good standing. The rest of the money went to the Tyler Foundation, a 501(c3) nonprofit funded exclusively by the Romneys. Though most of its donations defy criticism, others aren’t exactly middle of the road.

In 2006, for instance, Romney’s foundation gave $10,000 to the anti-gay Massachusetts Family Institute, which believes that sexual orientation is a choice that can be cured by what critics call “pray away the gay” programs. In 2009, it gave $25,000 to the Becket Fund for Religious Liberty, a year after its chairman, Seamus Hasson, compared marriage-equality activists to Al Qaeda. And of course, the Utah-based Church of Jesus Christ of Latter-Day Saints heavily campaigned in favor of Proposition 8, the California ballot measure that outlawed same-sex marriage but was later deemed unconstitutional.

Best Friends Foundation: $5,000
A program for troubled adolescents that advocates sexual abstinence. It is run by the wife of William Bennett, who served as Secretary of Education under Ronald Reagan. Bennett’s syndicated radio program, Morning in America, has been known to incite controversy. Responding to a listener in 2005, Bennett said that aborting all African-American babies would be “a morally reprehensible thing to do, but the crime rate would go down.”

City Year: $5,000
A tutoring program for at-risk youth in Boston. Its board of directors is dominated by executives from high finance, including Bain & Company, Romney’s former private equity fund.

Deseret International: $25,000
Provides medical services to the blind, lame, and disfigured in the developing world. It has close ties to the LDS church.

Operation Kids: $65,000
Directs money to other charities that serve children

US Equestrian Team Foundation: $10,000
Helps fund training of the US equestrian team for the Olympics. Romney first gained fame for his handling of the Olympics in Salt Lake City.

(Click here for a look at Newt Gingrich’s charitable donations.)