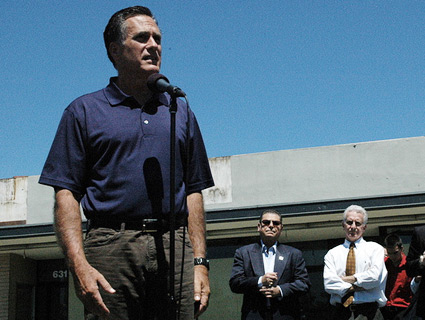 Editor’s Note: This story has been updated and corrected.

When Restore Our Future, the super-PAC backing Mitt Romney, disclosed its latest donors last week, the roster of deep-pocketed funders seemed fairly predictable. The biggest contributors hailed from Bain Capital, Romney’s former firm, or other well-known financial companies. But there was one major donor that stood out: Melaleuca, an Idaho-based company that peddles dietary supplements, “green” cleaning products, and other items via “independent marketing executives.” Melaleuca and its subsidiaries were among the biggest donors to the super-PAC, contributing a total of $1 million.

The company, which pulled in $1 billion in revenues last year, has had a run-in with federal regulators for allegedly making false claims about its supplements *(1). Critics have also accused the company of being little more than a pyramid scheme that misrepresents how much members of its sales force can earn for selling its products and referring new “executives” or customers to the company.

Romney has long-standing ties to the company’s CEO, Frank VanderSloot, who’s a fellow Mormon and Brigham Young University graduate. VanderSloot is currently one of Romney’s national finance chairs, and, in the past, Romney has headlined fundraisers for his own and other candidates’ campaigns at VanderSloot’s Idaho ranch. Last June, VanderSloot hosted a fundraiser for Romney’s presidential exploratory committee. Romney, in turn, has heaped praise on VanderSloot. When Melaleuca celebrated its 25th anniversary, Romney gave a statement lauding VanderSloot and the company in its magazine and on its website:

Under the leadership of Frank VanderSloot, Melaleuca has delivered on its promise of enhancing the lives of people. Frank’s vision and sense of social responsibility is second to none and he never ceases to amaze me. Congratulations on 25 years. I can’t wait to see what Melaleuca accomplishes over the next 25 years.

Melaleuca is a prime example of how the Supreme Court’s Citizens United decision has upended the campaign finance landscape, allowing a single individual to wield his corporation’s wealth to gain outsized electoral influence. In the 2008 presidential primary campaign, Melaleuca employees donated a total of $30,400 to Romney’s campaign; VanderSloot also contributed the maximum contribution of $10,000 to Romney’s Free and Strong America PAC. Post-Citizens United, the company’s contributions to Romney’s election effort rose exponentially. Company employee donations to Romney’s campaign committee for the 2012 campaign total only about $13,000, compared with the $1 million the company has steered to the Restore Our Future super-PAC.

VanderSloot has long been a controversial figure in Idaho politics, particularly when it comes to issues involving gays and lesbians. In 1999, he spent big on advertising in an ultimately unsuccessful effort to force Idaho Public Television to cancel a program that showed gays and lesbians in a favorable light to school children.

In 2005, he took out full-page ads in his hometown newspaper, the Post Register in Idaho Falls, attacking the paper and one of its reporters. The reporter, Peter Zuckerman, had rankled VanderSloot by breaking a major story revealing that local officials of the Mormon church, which sponsored local Boy Scout troops, had been aware that several pedophiles were serving as scout leaders or camp employees but did nothing about it.

VanderSloot’s ads bashed Zuckerman’s reporting, while noting that he was a gay man who had admitted in a story once that “it is very difficult for him to be objective on things he feels strongly.” *(2)

VanderSloot’s company also has a controversial background. Like Amway, Herbalife, and other so-called multilevel marketing firms, its business model relies on recruiting distributors, who in turn must recruit more distributors, to sell its products. On its website, Melaleuca pitches itself as a means to gain the economic freedom to live your dream life—all while working flexible hours from home. The company specifically targets mothers; a promotional video on the company’s website pitches Melaleuca as an opportunity to help “moms be moms” and “earn a corporate income working at home.” The women featured in the video claim to have made six-figure incomes through Melaleuca. One says she’s earned more than $500,000.

What these materials don’t say is that many of its distributors make very little. Buried on the website is a disclaimer, which lays out the earnings statistics of Melaleuca’s independent contractors. The average “marketing executive” makes about $85 per year, according to Melaleuca’s disclosure.

In 1991, Melaleuca entered into a voluntary compliance assurance (PDF) with the Idaho attorney general’s office, which found that “certain independent marketing executives of Melaleuca” had violated Idaho law. Among other things, the agreement required Melaleuca to ensure that its marketing executives would not suggest that the company or its marketing plan were endorsed by the FDA or the state attorney general, and that it would not use photos of current or former Idaho attorney generals in its marketing materials.*(3). The company was ordered to pay the state $1,000 for the cost of the investigation. (The state knocked off $500 in recognition of the company’s cooperation.)

In 1992, the Michigan attorney general’s office investigated Melaleuca’s business practices. The attorney general alleged that materials about a company program claimed participants were “making $80,000 to $100,000 within one or two years,” and that bonuses were paid simply for recruiting new participants, which is illegal in Michigan. The AG also alleged that literature from a Michigan participant made false and misleading representations that the company was endorsed by the Michigan attorney general and the Federal Trade Commission. “The [assurance] in this instance is very extensive and not our typical boilerplate,” says Robert Ward Jr., the former Michigan assistant attorney general who drafted the agreement with Melaleuca. “We seem to really nail them down to specific remedies not ordinarily required in these cases… We were concerned with earnings claims and their entire marketing program.”

Melaleuca did not admit wrongdoing, but it signed (PDF) an agreement with the state assuring that it would “not engage in the marketing and promotion of an illegal pyramid,” and that it would enforce its own policies to prevent distributors from referring to the FDA, FTC, or attorney general in its marketing materials. For a year, the state required the company to report monthly to the AG’s office on the results of its effort to ensure compliance with the agreement.

The Food and Drug Administration also has accused Melaleuca of deceiving consumers about some of its supplements—which the company claimed could treat clogged arteries or cure arthritis.

It’s not the first time a company accused of preying on consumers with pyramid-like practices and dubious dietary supplements has turned up as a megadonor to the pro-Romney super-PAC. The Utah-based nutritional supplement company Nu Skin and its executives have also been a source of funds for Restore Our Future. Nu Skin has been operating under a consent order with the Federal Trade Commission (FTC) since 1994, when it got caught misleading distributors about how much they would make hawking the company’s products and making false claims about its products. The company helped bail out the troubled 2002 Olympics in Salt Lake when Romney was in charge. Over the summer, two of its most prominent leaders also donated a million dollars each to Restore Our Future.

Robert L. Fitzpatrick, the author of a book on companies like Melaleuca and Nu Skin and a watchdog of the industry, says it’s easy to see why multilevel marketers are backing Romney. “It fits perfectly with Romney’s concept of capitalism, which others accurately describe as ‘vulture’ or ‘predatory’ capitalism.” The business model, he says, “sets the average person upon his neighbor to get at his assets, savings, and investments.”

UPDATE: The article reported previously published assertions that VanderSloot’s ad in the Post-Register outed reporter Peter Zuckerman. In a letter to Mother Jones, Melaleuca general counsel Ryan Nelson maintains that the ad did not out Zuckerman because Zuckerman had discussed his homosexuality publicly while in school in Florida. But Zuckerman’s boss at the paper, Dean Miller, has said that in Idaho Falls, Zuckerman “was not ‘out’ to anyone but family, a few colleagues at the paper (including me), and his close friends.”

In the letter, Melaleuca maintained its disclosure of earning statistics is not “buried” on its website, and noted that VanderSloot has said, in a previous interview, that it is “tough for most salespeople to earn any money.” The firm claims its “public disclosures about the earning potential of its income opportunity are considered to be one of the most open and complete disclosures in the direct selling industry.”

CORRECTION: The original version of this article contained errors, and it has been revised for accuracy. Mother Jones regrets these errors.

*(1) The article incorrectly described the regulatory officials who made charges of false statements about supplements. It was the federal Food and Drug Administration that addressed this matter, issuing the firm a warning in 1997 for “false and misleading” labeling regarding the safety and effectiveness of several products.

*(2) The article incorrectly described statements made by VanderSloot, Melaleuca’s CEO, in the Post Register ad. In the ad, VanderSloot repeated allegations—which he attributed to others—that reporter Peter Zuckerman’s sexual orientation had moved him to “attack the Boy Scouts and the LDS Church.” VanderSloot said it would be “wrong” to draw conclusions about Zuckerman’s motives.

*(3) The article incorrectly described the involvement of regulators in raising questions about Melaleuca’s earnings claims. It was the Michigan attorney general’s office that raised these questions. And the story incorrectly reported the nature of a voluntary assurance agreement between Melaleuca and the Idaho attorney general. The agreement did not involve claims that Melaleuca made misleading earnings claims.