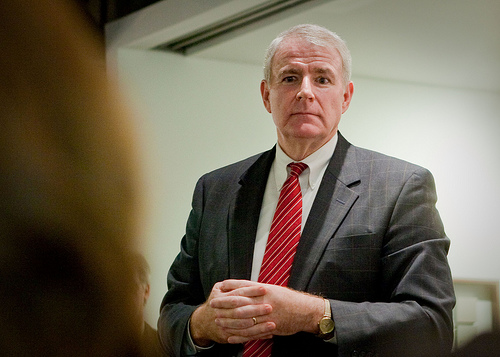 Overall, Wisconsinites are split on whether to Walker, 49 percent to 49 percent. In a hypothetical general election, Walker trails Milwaukee Mayor Tom Barrett 49 percent to 46 percent, and lags behind former Dane County executive Kathleen Falk 48 percent to 47 percent, according to a new survey by the left-leaning Public Policy Polling. The last time PPP surveyed Wisconsinites, Walker led Falk by 8 percentage points and Barrett by two.

PPP’s margin of error is 3.3 percent, which means these match-ups are essentially dead even right now. But PPP president Dean Debham said the numbers are encouraging news for Wisconsin Democrats in their push to oust Walker. “These are the most encouraging numbers we’ve found for Democrats in Wisconsin related to the Walker recall since last August,” Debnam said in a statement. “Walker’s numbers had been seeing some recovery, but now it appears they’ve turned back in the wrong direction. The big question now is whether Democrats can find a candidate to take advantage of Walker’s vulnerability.”

Even among lesser-known Wisconsin Democrats, including some who’ve given no indication that they would challenge Walker, the match-ups are close. US Congressman Ron Kind leads Walker 46-45 is the other Democrat who leads Walker, 46-45. Secretary of State Doug LaFollette, former US Congressman David Obey, and state Sen. Kathleen Vinehout all trail by just one or two percentage points.

Among the Democrats, the winner in these latest poll numbers is arguably Tom Barrett. Not only did he open up a lead on Walker, but he would cruise to victory in a hypothetical Democratic primary, beating Kathleen Falk 45-18. A January PPP poll showed Barrett ahead of Falk 46-27.

PPP also found that more Wisconsinites dislike Walker than like him, 52 percent to 47 percent. That means Walker’s fate could very well rest in the hands of independent voters. Problem is, independents don’t think that highly of Walker—55 percent dislike him compared to 43 percent who support him. What remains to be seen is whether tens of millions of dollars in TV ads, direct mail, and other messaging funded by mega-donors such as David Koch and Bob Perry can win over those independents in time for the spring election.