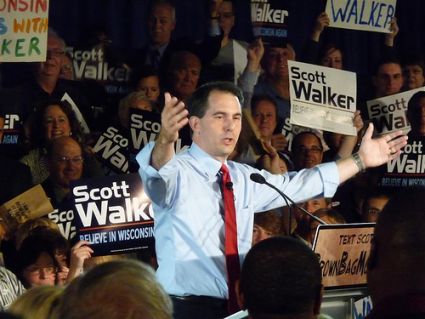 On MSNBC’s “Morning Joe” Monday morning, Wisconsin Gov. Scott Walker trotted out a new talking point as he defends himself from a well-organized recall campaign hoping to oust him from office. In a nutshell, Walker said: Think of the children! Think of the seniors!

Walker told MSNBC’s Willie Geist that the recall effort is “a huge distraction” for himself and Wisconsin state lawmakers. Grassroots organizers turned in more than a million signatures in November to trigger the recall election, which is expected to take place this spring. “I mean, it’s $9 million of taxpayers’ money just to run this,” he said. “Think about the number of kids we could help, think of the number of seniors we could help in our state with $9 million that we didn’t have to waste on this—this frivolous recall election.”

How ironic. In his first budget, Walker slashed public education funding by $800 million to $900 million. Walker and his administration have also sought to cut Medicaid funding, in effect booting more than 50,000 low-income families from the program, better known as BadgerCare Plus. The $9 million price tag for his recall election pales in comparison to the cost-cutting now pinching some of Wisconsin’s students and some of its most vulnerable citizens.

Walker went on to say that he’s encouraged by statewide polls showing in the lead over a handful of prospective Democratic challengers. A January poll by Marquette University showed Walker leading former Dane County executive Kathleen Falk, a union favorite, 49 percent to 42 percent. Walker also led Milwaukee Mayor Tom Barrett, who narrowly lost in the 2010 gubernatorial race, 50 percent to 44 percent. That said, Walker remains a divisive figure in Wisconsin. The same Marquette poll said 46 percent of those polled supported Walker while 48 percent did not.

Wisconsin Democrats, meanwhile, have unveiled their first ad of the recall fight, linking Walker to President Richard Nixon. The ad takes aim at the secretive “John Doe” probe targeting former Walker aides and compares the investigation to the Watergate scandal that led to Nixon’s resignation, the first for a sitting president. Here’s the ad: