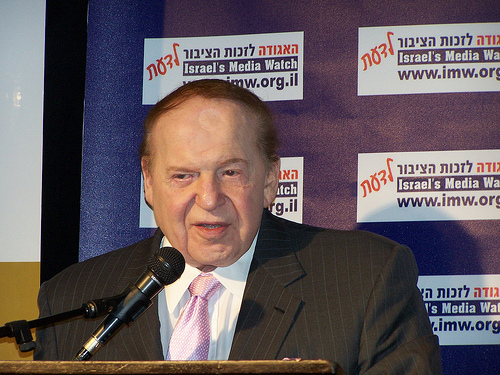 The media have jumped all over casino mogul Sheldon Adelson’s remark in a new interview with Forbes that he would spend up to $100 million of his fortune to elect Newt Gingrich president. Such a donation would be unprecedented in American history and would rock the GOP presidential race. Adelson and his wife have already pumped $11 million into the pro-Gingrich super-PAC Winning Our Future, helping resuscitate Gingrich’s campaign, and reportedly plan to give $10 million more.

But what pops out even more in the Forbes interview is Adelson’s take on super-PACs, which can raise and spend unlimited sums of money to influence elections so long as they don’t coordinate with candidates or campaigns. Put simply, Adelson doesn’t like them. “I’m against very wealthy ­people attempting to or influencing elections,” he says. “But as long as it’s doable I’m going to do it.” That sounds an awful lot like the man Adelson is trying to defeat: President Barack Obama.

Earlier this month, Obama, who had railed against super-PACs, changed his tune, urging his donors to give to the pro-Obama super-PAC Priorities USA Action. Obama’s campaign manager, Jim Messina, explained that the president’s shift grew out of the realization that “we can’t allow for two sets of rules in this election whereby the Republican nominee is the beneficiary of unlimited spending and Democrats unilaterally disarm.” Obama didn’t suddenly warm to super-PACs; he realized, as Sheldon Adelson has, that to compete you have to use the tools available to you.

Adelson, for his part, is unabashed about his support for Gingrich. “I have my own philosophy and I’m not ashamed of it,” he says. “I gave the money because there is no other legal way to do it. I don’t want to go through ten different corporations to hide my name. I’m proud of what I do and I’m not looking to escape recognition.”

Adelson’s beef with Obama, he insists, is not personal, but instead over what he calls “socialist” policies aimed at redistributing wealth in America. According to Forbes, Adelson’s net worth has leapt by $21.6 billion while Obama’s been president—more than any other person in America.