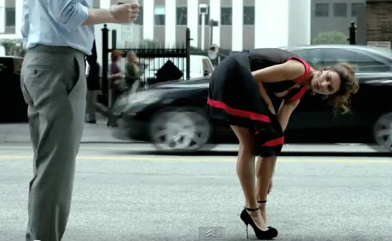 The Super Bowl is more than a game—it’s a chance to see some of the most expensive, over-hyped, and, yes, sexist commercials on television. But not everyone cheers when bikini-clad women fawn over nerdy office workers. This year, when advertisers used stereotypes and sex to hawk cars, flowers, and candy, viewers came up with a Twitter hashtag to broadcast their disgust: #NotBuyingIt.

According to Miss Representation, the organization that launched the hashtag, women make up about half of the Super Bowl’s audience and they’re more likely than men to tune in for the ads, rather than the game. Miss Representation notes that while they wield more household purchasing power than their male partners, 90 percent of women think advertisers don’t understand them. Super Bowl ads do an especially good job of missing the point by acting as though dudes are the only ones watching.

Thankfully, Twitter provides a place to talk back. Jenn Pozner, founder and executive director of Women In Media & News and author of Reality Bites Back: The Troubling Truth About Guilty Pleasure TV, says social media has “really changed the game” when it comes to challenging sexist advertising. “Last night, feminist media critics with a combined reach of literally hundreds of thousands replaced ‘mindless entertainment’ with active sharing of critical feedback and commentary,” she told me.

Shelby Knox, women’s rights organizer at Change.org, urged pissed-off viewers to create an online petition to take it beyond the Twitter-verse. “If enough voices object to an ad, then its makers will get the message that it’s not welcome on TV and it didn’t resonate with consumers,” she wrote on the site. The five ads below managed to outrage a lot of tweeps who are totally #NotBuyingIt.