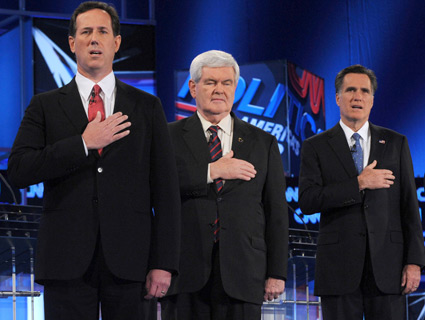 This story has been updated to reflect the latest primary and caucus results.

Rick Santorum is not going away. Not yet.

The former Pennsylvania senator clinched three notable victories Tuesday night, in the Missouri primary and Colorado and Minnesota caucuses. CNN called Missouri for Santorum at 9:45 p.m. Eastern, NBC News called Minnesota for him half an hour later, and the Colorado GOP called that contest for him just after 1 a.m. Santorum led Romney 55 percent to 25 percent in Missouri with nearly all votes tallied. In Minnesota, Santorum led the pack with 45 percent of votes, with 85 percent of precincts reporting. And in Colorado, Tuesday’s third and final election, Santorum led Romney by a single percentage point, 38 percent to 37 percent, with 83 percent of votes tallied.

The results of Tuesday night’s caucuses and primary aren’t binding, which means Santorum won’t immediately add any new delegates to his paltry total of 10 so far. (Who gets those delegates will be decided by state party officials in meetings to be held later this spring.) Binding or not, Santorum’s wins give him momentum and buzz at a time when he badly needs it. Apart from his belated, razor-thin win in Iowa’s caucuses last month, Santorum did not clinch any other early battleground races and has failed to supplant Newt Gingrich as the clear number two in the fight for the Republican presidential nomination.

Santorum’s win in Colorado comes as something of an upset. Mitt Romney, the front-runner, was predicted to win Colorado caucuses on the back of his strong ground game and campaign infrastructure there. He led in surveys from the left-leaning Public Policy Polling by as much as 14 percentage points in the run-up to the caucuses.

Romney wasn’t expected to win Minnesota or Missouri, where Santorum led in recent polls, and his campaign downplayed expectations in both states. On Tuesday, Romney political director Rich Beeson wrote in an email to supporters, “As our campaign has said from the outset, Mitt Romney is not going to win every contest. John McCain lost 19 states in 2008, and we expect our opponents will notch a few wins, too. But unlike the other candidates, our campaign has the resources and organization to keep winning over the long run.” Romney still leads the GOP pack with more than 100 delegates to his name—65 more than Newt Gingrich, currently in second place.

Newt Gingrich was the night’s big loser. He sat in distant third in Colorado with 83 percent of votes tallied and in fourth in Minnesota. He wasn’t on the ballot in Missouri after declining to pay the filing fee. Although Tuesday’s results are anything but a deal-breaker in the GOP nomination battle, they confirm Gingrich’s recent skid. On January 27, Gingrich topped the GOP field at 31.3 percent, according to RealClearPolitics’ polling average. Gingrich has now slipped to 23 percent by RCP’s count. Tuesday’s results aren’t going to stop that slide.

Rep. Ron Paul (R-Texas), whose long-view strategy involves methodically winning delegates throughout the nominating process, trailed by double digits in all three states Tuesday night. He finished second in Minnesota with 27 percent, fourth in Colorado with 13 percent, and third in Missouri with 12 percent. Before the elections, Paul stressed that he wasn’t expecting big results on Tuesday. “We’re gonna win some delegates. Whether we come in one or two or three, I don’t know exactly that,” Paul told CNN’s John King. “But we feel positive about moving along and picking up more delegates.”

All told, Colorado, Minnesota, and Missouri were the most pedestrian GOP nomination fights yet in 2012, with few fireworks and far less of the wall-to-wall media coverage seen in Iowa, New Hampshire, and South Carolina. Super-PAC spending was similarly subdued: A measly $32,000 was spent in Colorado, and that came from the pro-Santorum Red, White and Blue Fund. The pro-Romney juggernaut Restore Our Future spent $133,687 in Minnesota attacking Gingrich. (In Iowa, by contrast, Restore Our Future unloaded $3.4 million of attack ads on Gingrich.)

Next up for the presidential hopefuls are the Maine caucuses, which finish up on February 11, and then, on February 28, the Arizona and Michigan primaries, two binding primaries with 59 delegates at stake. That’s the next key multi-state primary day in the 2012 nomination fight. Whether Rick Santorum can build on Tuesday’s wins and catch fire in the three weeks before Arizona and Michigan arrive could determine his fate in this race.