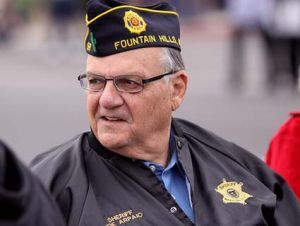 Presidential debates have never been particularly fertile ground for nuanced policy debates. So it shouldn’t come as too much of a surprise that at Wednesday’s GOP presidential debate in Arizona—a state with an ever-increasing Latino population—the discussion of immigration consisted mostly of a back-and-forth on how long and how many layers the border fence should be.

Part of that blame, though, falls on the moderator, CNN’s John King, who asked the candidates what they would do to satisfy Arizona’s most famous sheriff, Maricopa County’s Joe Arpaio, who was sitting in the audience. Mitt Romney responded by telling King, “You know, I think you see a model in Arizona.”

Rick Santorum took it a step further, singling out the sheriff by name: “I think what we need to do is to give law enforcement the opportunity to do what they’re doing here in Arizona and what Sheriff Arpaio was doing before he ran into some issues with the federal government, which is to allow folks to enforce the law here in this country, to allow people who are breaking the law or suspicious of breaking the law to be able to be detained and deported if they’re found here in this country illegally, as well as those who are trying to seek employment.”

Arpaio is a power player in Republican politics; he endorsed Rick Perry before the Iowa caucuses and met with Santorum for 20 minutes on Tuesday. He’s also using the power of his office to investigate whether President Barack Obama was born in the United States (spoiler: he was). He’ll release those results on March 1, and told reporters on Tuesday that he briefed Santorum on the details on the inquiry.

As my colleague Adam Serwer reported, a Justice Department investigation in December found that Arpaio’s department had consistently violated the civil rights of Latino citizens with no regard for their immigration status:

“We did not begin this investigation with any preconceived notions,” said Civil Rights Division Head Thomas E. Perez at a press conference in Arizona Thursday. “We peeled the onion to its core.” The conclusion? Arpaio’s office “engages in a a systemic disregard for basic constitutional protections.”